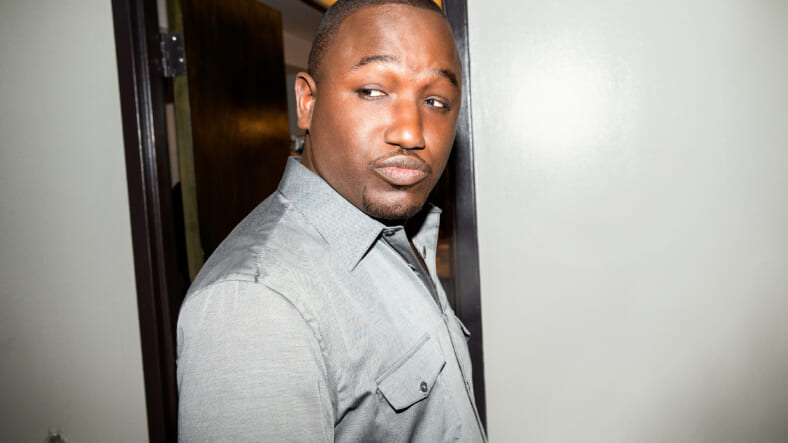 Going into his fourth hour-long special, Hannibal Buress knows what it takes to put on a good show. The 33-year old comedian, who grew up around Chicago’s legendary sketch comedy and improv scene, has enjoyed continued success since his first comedy festival in Las Vegas, Nevada. With every new gig he landed, the stand-up comedian felt himself becoming more established in the industry, ultimately deciding he felt pretty good about making a living in the world of comedy.

“I moved out of my parents place when I was 25, and I was doing opening gigs and selling T-shirts after shows,” he told Maxim. “I would be late as fuck with my rent sometimes, but I would make the rent. There was stuff going on, but I felt good about whether I’d be famous or not.”

Before the premiere of Comedy Camisado, Hannibal spoke with Maxim about the worst joke he’s ever heard, why he loves Hawaii, and turning into a big action star.

Dave Chappelle is one of of my comedic inspirations. His perspective is crazy and he’s super sharp. He can riff, he can tell stories, he can make up shit. It’s fun to watch him. I’ve been able to watch him dozens of times over the past couple of years and he’s one of the few that I’ll watch and over and over. Even some people that I really enjoy, I kind of know what their set is going to be if I’ve seen it twice within a certain time period. But Chappelle mixes it up a lot, man. A lot of sets have different feels. So it’s always fun to watch him.

Every guy should own one good pair of jeans. I’ve probably worn these jeans that I have on for like three weeks straight or something like that, or a month. I just wear the same jeans. I know it’s probably gross, but fuck it. It’s jeans, they go with everything.

Motherfucker is a great curse, it rolls off the tongue. It can be used as an exclamation of being disgusted. Or it could be used endearingly too, like “this motherfucker right here, man” or “ this motherFUCKER,” or, “MOTHERfucker.” I like all those different usages of motherfucker.

If I ever have downtime, I’m usually sitting in my place playing video games. Or Eating sandwiches somewhere, or watching sports some place. I watch sports anywhere, dude. I was in Hawaii, and even in Hawaii I was like, “Oh shit! It’s awesome being here because the games come on super early! And now we can watch sports early, but in Hawaii!”

I can’t think of the worst joke I’ve ever heard off the top of my head, but I was at the bar talking to someone and a girl comes up, and goes “Hey, I’m a huge fan,” and I was like, “Thanks a lot.” And she goes, “I have a joke for you, you want to hear it?” And I was like, “Nope.” [laughs] I was like, “No, no, please don’t.” Sometimes people have good ones, so don’t feel like just because I’m a comedian, you have to be one too.

In the future, I want to do an action movie! I’m going to get in shape, get ripped, and have my Chris Pratt transformation. And then become a movie star like that.