The talented up-and-comer talks preparing for ‘Vinyl,’ his dream of working with Jim Carrey, and what’s next. 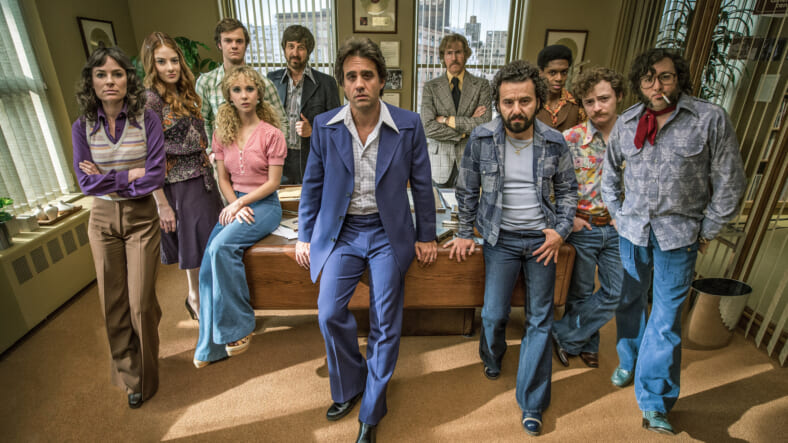 No over ever told Jack Quaid growing up that he had to be an actor. Despite being the product of two extremely famous parents (Dennis Quaid and Meg Ryan), the 23-year old found himself smitten with the idea of being a performer all on his own.

“It just so happened that I wanted to be an actor so it was kind of a happy coincidence that I had people n my life that shared my enthusiasm for telling stories,” he told Maxim. “We had a shorthand that some young actors don’t exactly have with their parents when they talking about acting, so I’m very thankful to have had that growing up. Acting in plays with all of my friends at a young age made me realize that performing was just something I wanted to do for a living.”

After making his on-screen debut in the monstrous box office-hit, The Hunger Games, an experience Jack chalked up to feeling ‘like summer camp’ with most of the cast’s similarities in age, the Los Angeles native continued climbing the ranks through Hollywood in search of the next big role that spoke to him. Lucky for him, that didn’t take very long.

Vinyl, a show focusing on the music business in the early 1970s New York scene, hits the HBO airwaves this Valentine’s Day weekend. “It follows Richie Finestra (Bobby Cannavale) as he tries to keep the label he’s built from going under during a very pivotal shift in American culture,” he said of the show’s plot. Quaid takes on the role of Clark Morelle, a young A&R who works for Finestra but isn’t exactly the cool guy you want to hang around.

“When you first meet him, he’s a bit of a weasel,” he told Maxim. “It was a lot of fun to play such a square and take him through this crazy world of sex, drugs, and rock & roll. One of the things that helped me prepare was watching the Woodstock documentary and then immediately watching Gimme Shelter, the Stones documentary about their concert at the Altamont Speedway. Getting to see the shift between the free-lovin’ 60’s to the darker grittier 70’s really helped me find an identity for the decade.”

As the youngest member of the cast, Jack shines alongside some of the best in the industry, and makes Vinyl, a show already being met with rave reviews, a show you want to watch.

Jack told Maxim all about that one item guy should own, his dream of working with Jim Carrey, and what’s next.

For my favorite curse word, I gotta go with “fuck.” It’s a classic! It can be used in so many different ways and it’s just plain fun to say.

I am in no way an authority on style but if I had to recommend something, I’d say that a solid, nice-fitting pair of jeans will get you out of a lot of jams. There was a brief time growing up where my Mom and I were the same height so our jeans would often get mixed up in the laundry. So there was a size-able amount of time in middle school where I was just wearing women’s jeans to school and didn’t know. Don’t make the same mistake I did, kids. Find a good pair and stick to ’em. They won’t let you down!

Recently I started writing a musical. I would love to finish it. People don’t even need to see it. I just want to say that I’ve written a full-length musical.

I’m a big video game fan. Just finished up the main campaign of ‘Fallout 4‘ which was a lot of fun. The stories in video games are so good now. It’s gotten to the point where I’ve had genuinely emotional experiences while holding a controller. Either I’m playing some multiplayer game like ‘Super Smash Brothers’ or ‘Call of Duty’ with some friends or playing alone while listening to podcasts. Pete Holmes’ “You Made It Weird” is my personal favorite.

Jim Carrey’s definitely someone I want to work with. He’s one of the reasons I wanted to become an actor. I don’t care if it’s a drama or a comedy, anything with him would be a dream come true.

As for what’s next, honestly, I’m just happy and thankful to be doing this now. I’m a writer too, so I guess a hope I’d have for the future would be to act in something I’ve written. That’d be pretty cool.