Inside Dublin’s Most Elite Presidential Suite

Everyone from Axl Rose to Miley Cyrus has stayed in this historic Irish hotel suite. 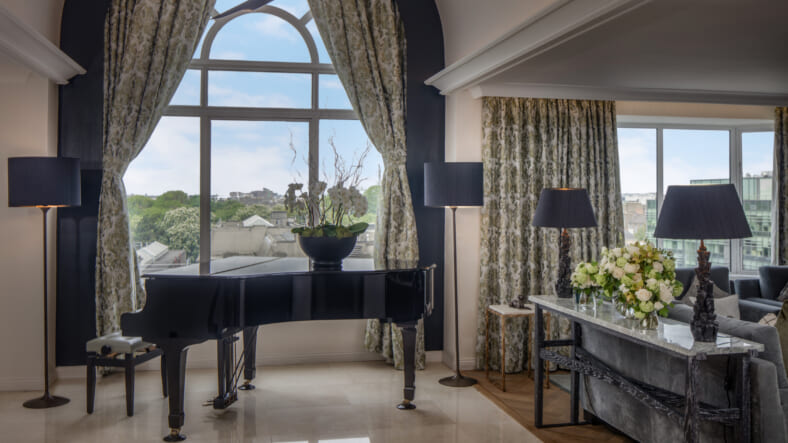 The Conrad Dublin hotel, located in the heart of Ireland’s bustling capital, is known as a favored stop for well-heeled business travelers and tourists alike, as well as employing a so-called “Limerick Butler” who taps out poems on a typewriter for guests at special events.

Located near the lush gardens of St Stephen’s Green and across the street from Dublin’s National Concert Hall, the Conrad also boasts a popular presidential suite that has hosted an impressive array of celebrities and dignitaries who require a particularly luxe lair when visiting Dublin.

Guests who have stayed in the Conrad’s 1,679-square foot suite have reportedly included Axl Rose, Miley Cyrus, Nicki Minaj, Joe Biden and Bill and Hillary Clinton, among other power pols. (A Conrad Dublin spokesperson declined to comment about who has stayed in the presidential suite, citing the hotel’s guest privacy policy.)

And it’s all just a short jaunt to attractions like Trinity College, the Guinness Brewery and the Temple Bar nightlife district, if you get bored of all that unadulterated luxury.

Interested? The Conrad Dublin Presidential Suite is available for about $2,600 per night, and can be booked right here.