These 8 Luxurious Hotels Once Served Time as Prisons 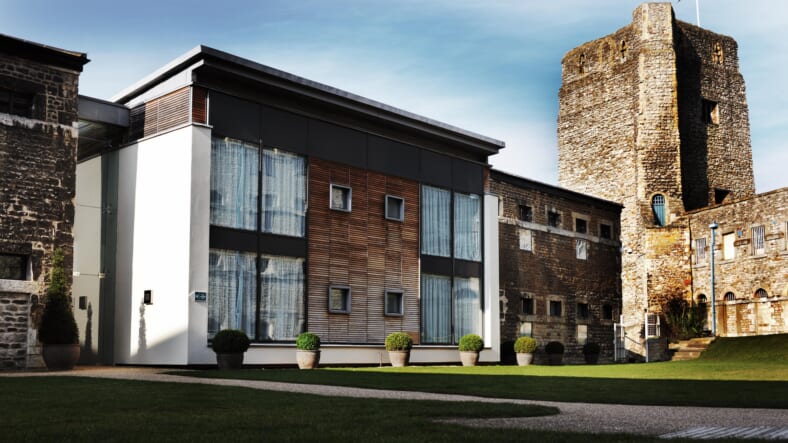 It’s nothing new to see hotels pop up in unexpected places, breathing new life into formerly abandoned spaces. Think old churches, deserted banks, and vacant warehouses. But travelers may be surprised to find out that their lavish suites were once prisons, catering to a very different type of guest.

Across the globe, there’s a bevy of properties that have converted concrete and iron holding cells into everything from charming inns to over-the-top luxury hotels. Here are a few of our favorites that are so nice, it would seem like a crime not to spend the night.

Overlooking the sparkling Mediterranean Sea and Tel Aviv’s ancient Jaffa Port is one of Israel’s most buzzed-about newcomers. The Setai Tel Aviv is a five-star urban resort that opened earlier this year, blending modern luxuries with the city’s rich historic heritage. But before it opened its doors as a posh hotel, it lived many lives.

Originally constructed as a fortress during the 12th-century, the building then served as Tel Aviv’s main prison throughout the Ottoman period. Following a 20-year preservation process led by the Israel Antiquities Authority, the building has been carefully restored to its former grandeur and retained plenty of authentic touches, like original stone and ironworks that allude to its darker past.

Today, The Liberty Hotel is an architectural masterpiece tucked away in Boston’s beloved Beacon Hill neighborhood. But the gigantic granite building traces its roots back to 1851 when it opened as the Charles Street Jail, operating as such for more than a century. The jail was closed down for good in 1990, and a team of architects, designers, and historians transformed the space into a lavish 298-room hotel, with 19 of the rooms inhabiting the former cellblock.

Original elements can still be found, including the 90-foot-high atrium, which is now home to the lobby; catwalks that encircle the lobby from above; a prison yard that serves as the hotel’s garden; and wrought iron barred windows found throughout its on-site restaurant (cleverly dubbed Clink).

England’s Oxford Castle was erected in 1066, but began operating as a Victorian jail in the mid-1700s. Around this time, the Oxford County Justices purchased the prison and had it rebuilt in 1785. For more than 200 years, it acted as one of Oxford’s most active penitentiaries, until 2006 when it was fully renovated into a hotel by the Malmaison hospitality brand, which is known for converting historic buildings into trendy, boutique hotels.

Today, Malmaison Oxford is a swanky retreat just steps away from Oxford University. With a mixture of different room layouts, the fan favorites are the converted cells found in the hotel’s A-wing. Expect vaulted ceilings, thick walls, and original imposing iron doors.

Luang Prabang is certainly having a moment, attracting tourists from all over the world thanks to its cultural charms and laid-back, luxurious vibe. The ancient capital of Luang Prabang Province in northern Laos is known for its gilded temples, lush nature, and friendly locals, as well as its opulent retreats. The Sofitel Luang Prabang is no exception, but before it was a five-star hotel, the building served as the city’s former prison for decades.

Located just out of town, the refuge is now home to 23 well-appointed suites that offer visitors a relaxing reprieve. With a subtle institutional air, the only real indications of its prison past are the two corner watchtowers, where guards once kept a close eye on inmates.

The Stockholm Archipelago is a cluster of more than 30,000 islands, islets, and skerries, and Långholmen happens to be one of them. Locals flock to the idyllic island in the warmer months for picnics, swimming, and leisurely bike rides. But from 1725 until the mid-1970s, it was actually a feared prison island, home to one of Sweden’s largest penitentiaries, with more than 500 cells.

Now a popular tourist attraction, the Långholmen property is part hotel, part youth hostel, complete with a conference center and prison museum. There’s also a restaurant found in the former prison’s hospital that serves up traditional Swedish fare like picked herring. Guests checking in can even choose between single, double, or family-sized cells for a truly unforgettable experience.

Between 1788 and 1869, the British government exiled more than 160,000 convicts to various penal colonies throughout Australia. So it isn’t too surprising to learn that some of the prisons are still functioning today, while others have been refurbished to serve myriad purposes.

Take The Old Mount Gambier Gaol in South Australia for example. “Gaol” is an old English word that means “prison” which is exactly what the building was for more than 150 years. The small cells have been converted into comfortable rooms with metal bunk beds that remind visitors of its storied past. Plus, with all of Australia’s natural wonders, you won’t mind doing a little hard time here.

Quaint and charming are some of the words people tend to associate with the tiny state of Rhode Island—a far cry from anything criminal. But the Jailhouse Inn proves that this coastal destination wasn’t always so innocent.

Constructed in 1772, the Newport Jailhouse was less of a high-security prison, and acted more as a holding facility for prisoners being transported through the area en route to trial in other New England cities. In fact, it had a bit of a reputation for being a little too easy to escape from. Nowadays, nobody is trying to flee the cozy inn. The small property underwent a series of renovations in 2005, but kept design details like barred doorways and windows as a nod to its humble beginnings.