This Hidden Caribbean Island Is a World-Class Scuba Diving Destination

Take a deep dive into Bonaire. 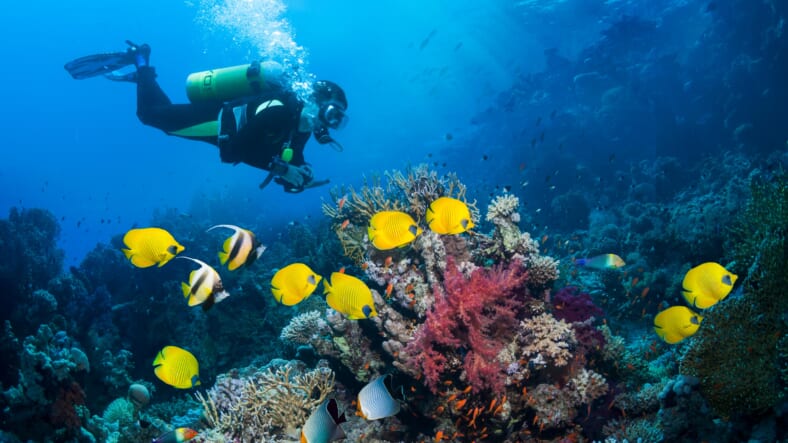 The small island of Bonaire, located some 50 miles off the coast of Venezuela, is best known for its herds of feral donkeys. Left on the island by Spanish traders in the 17th century as a sort of depot for cheap labor, the jackasses quickly adapted to their new landscape, made the island their home, and now roam the Dutch archipelago completely untethered — free to stroll into traffic, nibble on farmers’ crops, bray mindlessly and make a general nuisance of themselves.

But the proud people of Bonaire are hoping to change the narrative, so to speak. As ad man extraordinaire Don Draper once suggested, “If you don’t like what’s being said, change the conversation.”

And thankfully for Bonaireans, they boast an obvious topic of conversation: world-class scuba diving.

The forgotten sister of the Dutch ABC Islands — along with Aruba and Curaçao — Bonaire is still a mystery to most. Actually, let’s be honest; almost nobody in the USA even knows what, never mind where, the hell Bonaire is. (When I first mentioned the trip to friends, one said he thought Chevy discontinued that model years ago, and the other assumed I was talking about Wisconsin folk hero Bon Iver.)

It’s not that Bonaire isn’t on the radar of master scuba circles everywhere as one of the best hidden gems in the Americas, it’s just that outside of that elite sphere few even know the island exists. So we boarded a five-hour flight from Atlanta to the edge of the Caribbean Sea to find out, firsthand, if Bonaire’s nascent diving reputation was well earned.

“It’s the best diving in Caribbean, other than maybe the Bahamas,” Frank tells me, clutching a Heineken beer. We’re maybe an hour from landing at Flamingo Airport, and my amicable seatmate hadn’t slept since the Brewers game he’d partied at the night before. Still, his excitement to dive overpowers any sleep deprivation. With over 30 years of scuba experience under his belt, the Milwaukeean tells me he returns to Bonaire at least a couple times a year since discovering the island a decade ago. “The amount of aquatic life you’ll see is off the charts,” he gushes, “I’ve never seen anything like it before.”

I would quickly come to find out Frank wasn’t being hyperbolic. My first dive was a spot called Yellow Submarine, smack in the middle of downtown Kralendijk, at Dive Friends Bonaire’s main shack. We just threw our BCD vests on, ran through a couple simple rules, and dove down. And even here, right off the sleepy capital’s main strip, the amount of fish was unreal.

To be precise, it’s not the variety of fish — although with over 400 species in its marine park, that is robust — it is the amount of fish. As in, everywhere you dive you discover massive schools of wildlife crisscrossing each other like rush hour traffic.

You can thank STINAPA, Bonaire’s national park foundation, for this glorious abundance. The island proudly claims the oldest aqua marine park in the Caribbean, protecting 100 percent of the island’s shores (down to 200 feet deep) and 20 percent of the land as well. Founded way back in 1962, STINAPA has vigilantly protected the island’s wildlife, mangrove and coral reefs in a way that no other Caribbean island has — and the results can be seen on every dive. The reefs are so vibrant the National Oceanic and Atmospheric Administration (NOAA) sets Bonaire as their benchmark for reef health across the Caribbean.

And with 87 total dive sites on Bonaire (and another two dozen on nearby Bonaire Kleine), the variety of reefs and seascapes is staggering. Whereas the reef on Yellow Submarine sloped gently downward, another spot aptly named the Cliffs featured an almost straight drop of 60 feet — creating a wall of hard and soft coral, forests of purple tube sponges, anemones, and a wide swath of aquatic wildlife.

We found a rare spotted eagle stingray doing his rippling swim at the bottom of the cliff, a brilliantly camouflaged scorpion fish and plenty more.

The second, and perhaps most compelling, attraction of Bonaire diving is the sheer number of shore dives, with no less than 65 walk-in spots circumscribing the island. Look out for bright yellow stones on the side of the road where you can just pull over, grab your tank, and wade in. It’s the reason why USA Today recently selected Bonaire as one of their 10 best diving sites in the U.S. and Caribbean, dubbing it “the shore diving capital of the world.”

Not needing a boat eliminates a huge cost and saves a lot of time, removing a crucial friction point in enjoying the sport. For beginners this abundance is especially advantageous. Dive Friends offers a package with limitless tanks for a week for $180, so you could do 4-5 dives every day. Not only is this an unheard of value, but it allows beginners to quickly stack hours in their dive book.

It also makes night diving a breeze, since you don’t have to fire up a boat to get anywhere when the sun drops. Giant tarpons will usually join your group, using your lights to hunt in the darkness. If you’re lucky enough to be here for a full moon, don’t miss the experience of swimming among the bioluminescent Ostracods — tiny glowing crustaceans that create star-like galaxies you float through weightlessly.

One day we took a boat out to Klein Bonaire, an even smaller uninhabited island just a half-mile from port. The variety of fish here was a little better; we found ourselves hypnotized by the delicate foliage of sea slugs crawling on a brain coral. The sea horses were especially cool — some bright yellow and bold, others nearly indistinguishable from the corral they hid within.

But the boat was simply a luxury, an easy way to break up the shore dives should you feel inclined. Because the sheer volume of available shore dives, and the variety of both wildlife and environment they provide, is enough to keep you stoked for several trips to Bonaire. There’s even a sunken ship to investigate: the 236-foot Dutch freighter Hilma Hooker, confiscated with 25,000 pounds of marijuana stuffed behind a fake bulkhead. Resting about 30 meters down, the Hilma Hooker can be reached by even novice divers.

Another unexpected consequence of STINAPA’s vigilance is just how chilled out the wildlife is. Since they’ve never been hunted or abused like on other islands (you’re not allowed to spearfish, drop anchor anywhere off shore or even wear gloves — all to protect reefs), the fish don’t regard divers as threats.

Huge schools haven’t been trained to fear man, so you can swim right up to and then through giant clouds of fish. A pair of black and gold French angelfish came right up to my mask, inches away, and stared me in the eyes almost as curious of me as I was of them.

The proximity allows for some spectacular aquatic experiences. Rainbow parrotfish, their grey and yellow liveries streaked with glowing electric blue stripes, are absolutely mesmerizing every time you see them. Plump lionfish hide in the coral, warning you off with their toxic plumage. Then there’s the camouflaged honeycomb, changing colors from its black and white namesake pattern to iridescent blue in a flash when followed.

The one knock on Bonaire, vis-à-vis wildlife, is the lack of large fish. With the exception of tarpons and barracuda there are few fish longer than one meter. Some sharks, including whale sharks, and even manta rays can be seen in season, but we spotted nothing of the sort. Still the abundance and variety more than make up for the lack of size.

Back on land, we laid our heads at the Marriott Courtyard Bonaire, the only internationally branded hotel on the island. Trailblazing in the Caribbean is never easy, where hurdling the pervasive “no shoes, no shirt, no problem” island mentality can be… well, an uphill battle. But the service at the Courtyard was far beyond the brand’s normal quality level. With 140 clean AC-chilled rooms it’s the largest resort on the island, boasting a spa, powerful free WiFi throughout, and a Dive Friends PADI 5-Star location in-house with boats leaving directly from their dock.

It also claims the only infinity pool in all of Bonaire, looking out across the water to expensive private homes.

Built on a finger of land in a maze of canals, the rooms, apartments and villas are all contained within two rows of candy colored buildings ending at the BLT Burger restaurant. Every room looks out onto water via floor-to-ceiling windows, with the landscaped grass, aquatic views and colorful veneer giving the resort a festive Caribbean vibe.

Know beforehand that Bonaire doesn’t offer much in the way of nightlife — people are here to dive, and little else. But if you do get an itch to bend the old creaky elbow, you won’t do better than Little Havana. We discovered the cozy, dark bar while wondering the streets of Kralendijk and couldn’t have been more stoked.

Vinyl records cover two walls (everything from Jimi and Elvis Costello to Europe), and on some Wednesdays they let the customers curate the soundtrack. Other Wednesdays there’s a live band, or trivia night. As the name implies Little Havana boasts a robust cigar case, filled with quality Cuban and Dominican offerings. It’s also the type of place where if you buy a pack of cigarettes, they’ll unwrap them for you and hand you a lighter — with a Cacique on the rocks. Simply one of the best bars in all the Caribbean.

Right now there are only three direct flights from America: United and American flights on Saturday and a Delta flight on Sundays. By the end of the year (December 13, 2018) American plans to expand to four flights per week from Miami.

Oh, and we were just joking around about the donkeys. They’re quite adorable, and actually have a very hard time surviving on the island. The Donkey Sanctuary Bonaire cares for these kind creatures, healing the sick and feeding and caring for those foals that lose their parents to traffic accidents, disease, etc. If animals are your thing, visit the Donkey Sanctuary Bonaire when you’re there for a tour of their sprawling ranch, or feel free to donate what you can.