“Get to the Choppa” while wearing this insanely rugged timepiece. 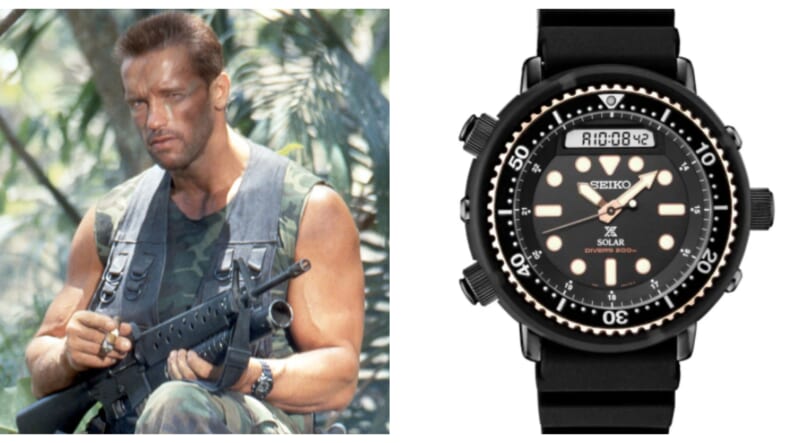 The 1980s are cooler today than they actually were. That’s okay because good movies like Predator came out of that decade. So did some great timepieces, including the watch worn by Arnold Schwarzenegger‘s Dutch Schaefer in the movie, an ana-digi (analog and digital) Seiko H558-5009.

The original Seiko was so identified with Schwarzenegger—he wore one in Commando as well—it became known as the “Arnie.” It’s back as part of the Prospex line with a new set of style numbers: SNJ025-SNJ028, all the cool specs of the original model, and more.

You can watch a detailed breakdown of everything going on with this watch in the Long Island Watch video above, but here’s a thumbnail sketch:

The video below features an intriguing review of the original, which was a quartz model and can go for $1,000 and up today when purchased from collectors’ sites like Chrono24.

At the moment, the $550 Seiko SNJ028 is sold out. However, the other, slightly less expensive models are still in stock (including a Pepsi variation) and you can pick them up via Seiko’s website for $525 apiece.