‘The Godfather’ Horse Head Scene Mansion is Selling For $125 Million

The ultra-extravagant Beverly House was also the site of JFK’s honeymoon. 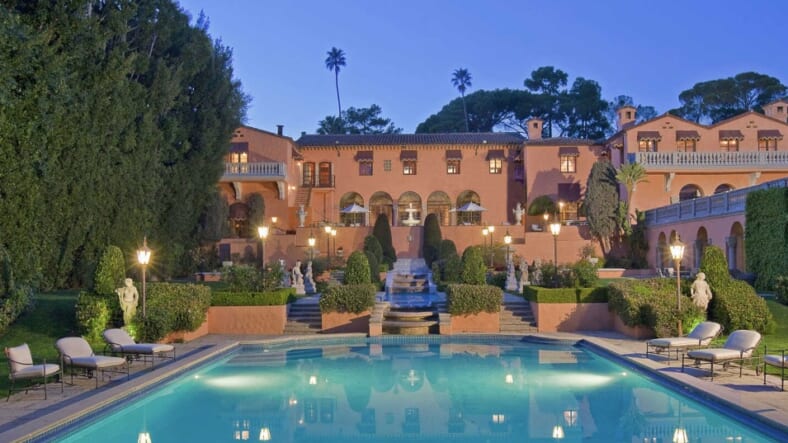 The Beverly House is a Revival-style Mediterranean mansion on 3.7 gorgeously landscaped acres in Beverly Hills and it has the kind of amazing history you might expect for such a luxurious location. Originally owned by newspaper tycoon William Randolph Hearst, the 18-bed, 25-bath residence has been the setting for legendary movies—most notably The Godfather—and home to history, as when John F. Kennedy and Jacqueline Kennedy had their honeymoon there.

The Beverly is listed by The Agency. They describe it as a “trophy house” and note that in addition to its many rooms and suites, the mansion has “a near Olympic-size swimming pool, lighted tennis court, two projection/screening rooms, a commercial-grade kitchen, terraces to accommodate 400 or more guests for a seated dinner and grounds to accommodate more than 1,000 people, among other attributes.”

Mental Floss reports on The Beverly’s “impressive filmography,” writing that it appeared “in the 1992 film The Bodyguard and The Godfather‘s (1972) iconic horse-head-in-a-bed scene.”

(You can check out that scene here for a beautiful exterior shot of the house but may want to click out before the music gets creepy, as the severed horse head is still pretty gruesome.)

The H-shaped Beverly is 50,000 square feet of elegance and additional features include a two-story library and hand-carved woodwork on the walls and balconies, as well as a billiard room with an antique fireplace and an Art Deco lounge.

The Beverly House is located at 1011 N Beverly Drive in Beverly Hills, California, and is currently on the market for $125 million. Learn more at theagencyre.com.