The Ultimate Collection of Supreme Skateboard Decks Can Now Be Yours

The insane collection of 248 skateboard decks, some created by the world’s top artists, could fetch more than $1 million at auction. 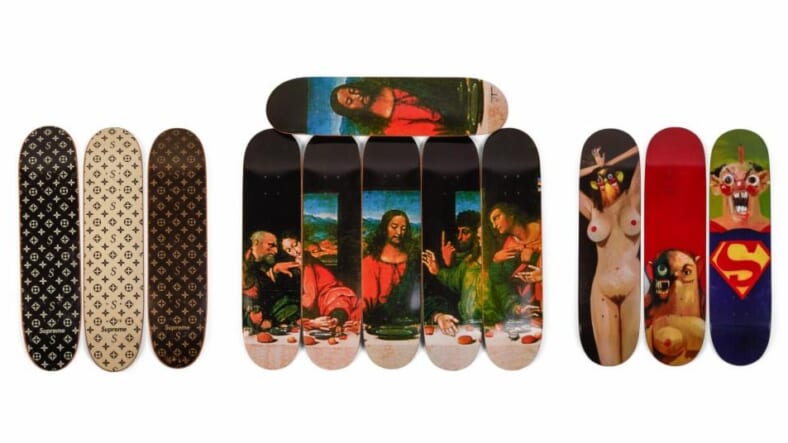 Supreme merch isn’t hard to come by—the world’s most powerful logo pops up on everything from luggage to Vans sneakers and even freakin’ bricks.

But finding a complete collection of every Supreme skateboard deck produced over the last two decades is extremely rare, which is why its being sold exclusively through the prestigious Sotheby’s auction house.

Among the 248 pieces are sets of six Last Supper decks from 2002, two Public Enemy decks from 2006, two New York Yankees decks from 2015, a Bruce Lee deck from 2013, plus decks featuring characters from the movies E.T., Hellraiser and Scarface.

The collection also includes decks from top fine artists including Jeff Koons from 2008, Damien Hirst from 2009, Raymond Pettibon from 2014 and Dash Snow from 2016.

Also included is a Louis Vuitton Boite skateboard trunk from 2017 complete with a tool kit, trucks, wheels and shoulder strap.

Buyers have seven days to place a $500,000 starting bid, but estimates indicate that the arty skater swag could fetch up to $1.2 million.