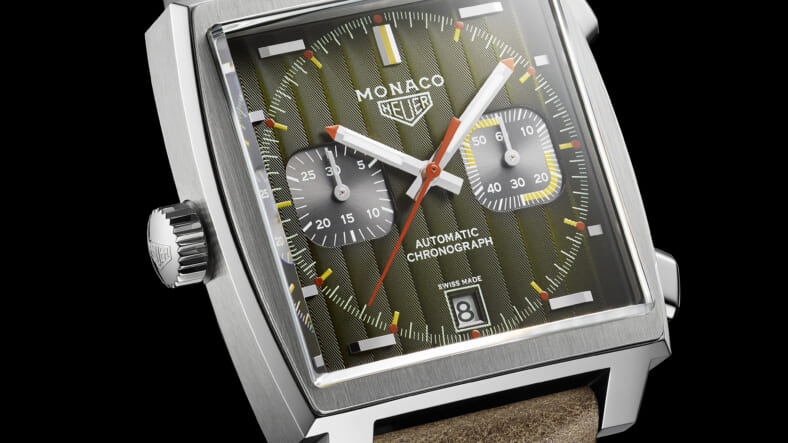 TAG Heuer has been making the most of its motorsports heritage lately, with limited edition models that are close recreations of classic timepieces that helped establish its reputation for precision and style.

While the square-cased Monaco isn’t for everyone, it was made famous by Steve McQueen in the 1971 racing flick Le Mans, making it an instant icon. And since 2019 marks the 50th anniversary of the watch which was first introduced in 1969, it’s only fitting that they’re releasing a collection of five limited edition Monacos.

The first was just unveiled at the Monaco Grand Prix this past weekend, where the unstoppable Lewis Hamilton, driver for Mercedes-AMG Petronas Motorsport and five time Formula One world champion, vanquished the competition. TAG Heuer has been the official watch of the Monaco Grand Prix, from which the Monaco takes its name, since 2011.

The stainless steel Monaco 1969-1979 Limited Edition, limited to just 169 examples, gets a groovy ’70s treatment with an olive green dial with brown and yellow highlights and a pattern watch geeks call Côtes de Genève. It comes on a vintage-style perforated light brown leather rally strap, presented in a special box.

The caseback is engraved with the original Monaco Heuer logo as well as “1969-1979 Special Edition” and “One of 169”, and its powered by TAG’s Calibre 11, a modern version of the world’s first automatic-winding chronograph movement that made its debut inside the original Monaco.

TAG unveiled the $6,550 watch at a swanky event in Monte Carlo with VIPs choppered in, attended by the likes of TAG Heuer brand ambassador Patrick Dempsey, models Bella Hadid and Winnie Harlow, and Max Verstappen, driver for the TAG-sponsored Aston Martin Red Bull Racing team, who placed 4th at the race.

The proceedings also included a private tour of the Monaco Top Cars Collection museum featuring an iconic Gulf Oil Porsche 917k race car as featured in McQueen’s Le Mans movie, along with the original racing suit the actor wore in the film, as well as his helmet and Heuer Monaco watch that inspired the current version.

That would seem like more than enough excitement for one watch brand. However the weekend also saw the running of the 2019 Indianapolis 500, and TAG took the opportunity to drop a couple more timepieces there, commemorating status as the Official Timekeeper of the race.

Sized at 41mm and finished in a black and white and scheme with red highlights, it comes on a perforated black rally strap with red contrast stitching and lining and features the Indy 500 logo on the sub-dial at 6 o’clock.

Priced at $4,750 its a reasonably cool way to pay tribute to the Indy 500 if your style is more Midwest than Monte Carlo….