“The Beekman” watch is the latest in an iconic partnership. 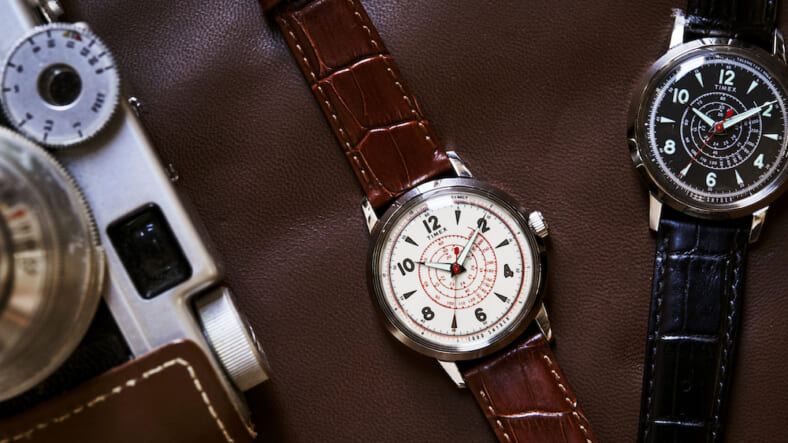 Watchmaker Timex and menswear designer Todd Snyder continue their tradition of collaborating on vintage-inspired timepieces, this one a 1960s-style racing watch.

The all-new TIMEX + Todd Snyder Beekman watch is inspired by a design Snyder first saw in the Timex archives.

It features a tachymeter complication that can measure the speed of passing objects, like a 1969 Ford GT40 on the Le Mans racetrack.

That graphic swirl on the watch dial does not just look cool, but it is also a tachymeter scale used to calculate speed.

Timex x Todd Snyder gave a rundown on how the function works in a press release.

To prepare the watch for the speed measurement, the wearer must pull out the watch crown when the second hand is at the 12 position, this will stop the movement of the second hand. As the car passes its starting point, the crown is pushed in to begin the timing process; when the car reaches the end of the course, quickly pull the crown out again. Review the position of the second hand against the tachymeter markings to determine how many miles per hour that classic Ford has traveled.

The watch is made in a stainless steel case and acrylic domed crystal and featured Timex’s trademark Indiglo night-light.

Available in either a classic cream dial with a brown, croco-pattern leather strap or a black dial with a tonal black leather strap, the Beekman is now available on ToddSnyder.com for $158.