Pour one out for their latest limited-edition kicks. 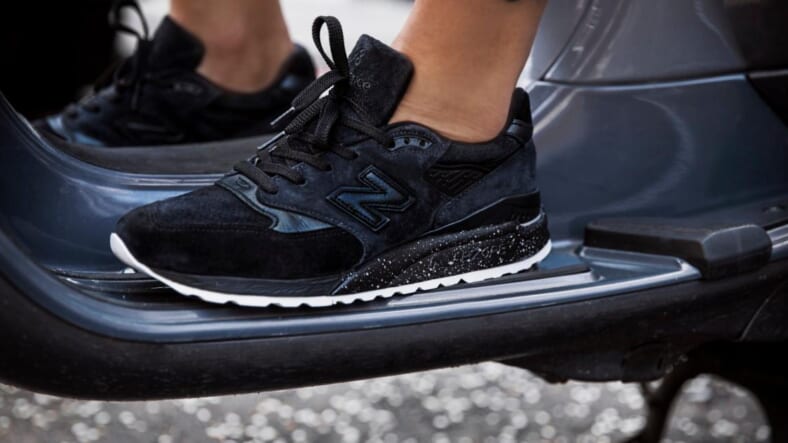 Menswear titan Todd Snyder has been on a roll lately. The New York-based designer not only oversees his namesake line of clothes and accessories that are reminiscent of an upscale J.Crew, but he’s been steadily churning out tasteful collabs with heritage brands like Champion, Timex and New Balance.

Go to Snyder’s Manhattan flagship shop, which the New York Times memorably described as “a salad bar of men’s clothing and lifestyle accessories,” and you’ll also encounter fine suiting, footwear (from suede boots to classic sneakers), vintage Rolexes and a Moscot eyewear stand. It’s a smorgasbord of gentlemanly style that’s ruled by Snyder’s clean, aspirational aesthetic, and all in all, it’s a damn good look.

But today we’re here to discuss the fourth sneaker in the ongoing collaboration between Todd Snyder and New Balance, the “Dark and Stormy” 998. Yes, these blacked-out beauties already get major points for being named after the classic summer cocktail, the name of which Gosling’s rum is famously protective.

The Dark and Stormy sneaker is just as accessible and suited for summer as the drink it was named after. It’s a beachy blend of deep ocean blacks and marine blues, with premium fabric and Horween leather trim on the heel and tongue, and is inspired by a reissue of New Balance’s classic 1983 kicks.

“With its flavor contrasts and ombre hues, the Dark & Stormy is pretty much a perfectly designed beverage,” Snyder gushed in a press statement. “Maybe it’s the rum and ginger beer talking, but it felt like the ideal reference for an elevated yet easygoing summertime sneaker.”

This isn’t the first playfully boozy spin on the 998 from Snyder, who likes to name sneakers after his favorite drinks. He previously mixed up New Balance revamps called the “Dirty Martini”, the “Black and Tan” and the “Sunset Pink”.

The limited-edition “Dark and Stormy” sneakers are available now at ToddSnyder.com for $218, and are sure to sell out fast.