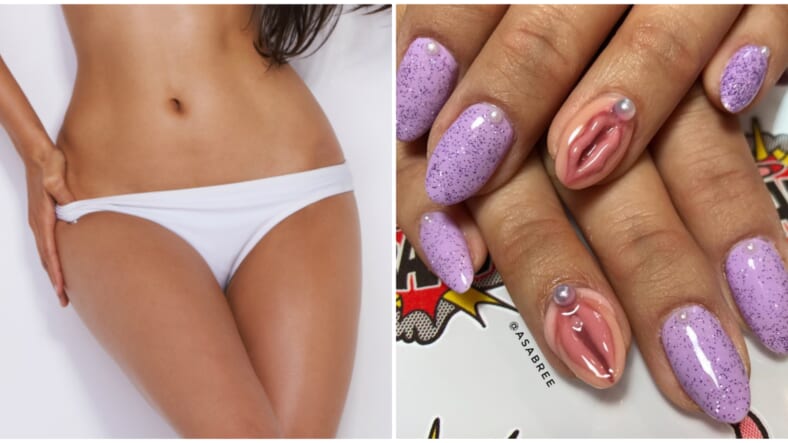 I’m just going to go ahead and say it since no one else is: the style trends of 2017 are getting out of hand.

Actually, no – they are out of hand, and they’re just getting worse, and I’m scared to know what’s going to come next.

First, we had the RompHim, which is a romper for men, which then evolved and unfortunately transmuted into frilly lace shorts for men.

In the women’s department, we have fidget spinner pasties and boob hammocks, neither of which were asked for by anyone, yet they still exist.

And now, the People’s Republic of Instagram has invented yet another trend that has no place in this already-troubled world: Vagina Nails.

Vagina nails, as the name and image above indicate, is a form of manicure and nail art where little lady bits are painted onto fingernails, and then proudly displayed on Instagram with a #feminist caption for the sake of pussy power.

I must say, the artistry is impressive, because it clearly takes a lot of skill to mold a tiny punani on a fingernail. I can hardly draw a straight line on a sheet of paper, so kudos on the finesse.

Some nail artists are very blatant about their designs, and paint vagina nails that shamelessly scream “Look! A vagina! Look. At. It.”

In fact, this particular person decided to paint vaginas on nails, as well as breasts, and dicks.

Others, however, opt for a more subdued, gently suggestive design that isn’t as aggressive…like these nails:

That could simply be abstract art. Some kind of weird orchid, perhaps. Or a vagina. It’s all up to interpretation.

Now, I’m not a personal fan vagina nails, nor do I think it’s a particularly cute look for women to paint the grandest canyon on their hands for whatever reason, but to each her own.