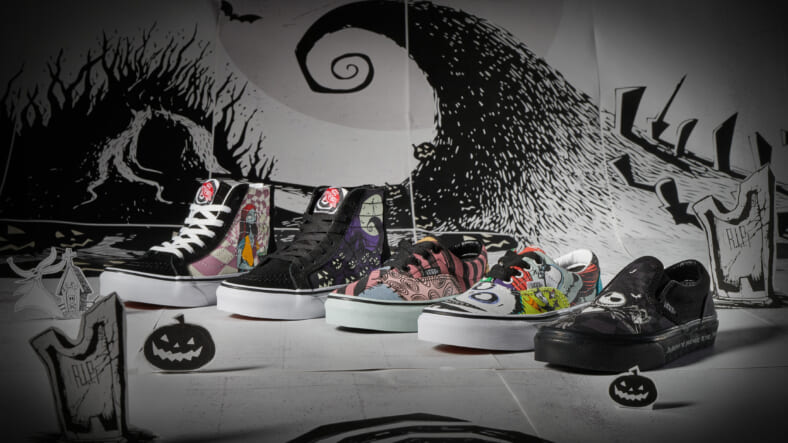 Vans has finally dropped its special edition sneaker collection celebrating director Tim Burton’s 1993 animated classic The Nightmare Before Christmas, which have been buzzed about by sneaker obsessives and Halloweentown lovers alike.

Van’s Sk8-Hi, Authentic, Old-Skool and Slip-On shoe styles have been redesigned to feature colorful collages of iconic characters from The Nightmare Before Christmas, including Halloweentown king Jack Skellington, Sally Zero and the Zombie Band.

Vans had previously leaked word of the spooky sneakers by sharing an Instagram video in September, and now comes news that the 10-piece footwear collection is going on sale very soon, along with some matching apparel.

“Jack’s Lament” is featured on the Sk8-Hi with each of the four panels showcasing a frame from Jack’s walk through the Halloween Town cemetery. A special message that reads “Nice Work, Bone Daddy” on the inside collar completes the design. For completists, an accompanying Jack Pull Over Hoodie features a special rendition of Jack’s Lament with a Checkerboard spiral hill. The Pumpkin King’s ghostly suit is featured on the Classic Slip-On, while Dr. Finkelstein’s master humanoid creation, Sally, receives her very own Era Stacked silhouette and Sally Patchwork Crew. Inspired by her very creation, each style is collaged with various prints from her dress while the Era Stacked features hand-stitched details.

The Classic Slip-On and long sleeve t-shirt showcase emblematic elements from Oogie Boogie’s underground lair, including dice and skull graphics on the sidewall and sleeves of each silhouette. Oogie Boogie’s trio of henchmen—Lock, Shock and Barrel can be found on the Old Skool and panels of an Era.

There’s also the ComfyCush Authentic, which features all of the characters from the film layered on a Checkerboard backdrop.

The Vans, Disney and Tim Burton’s The Nightmare Before Christmas collection will be available at Vans dealers, Vans stores and Vans.com/nightmare beginning October 4.