Out of this world. 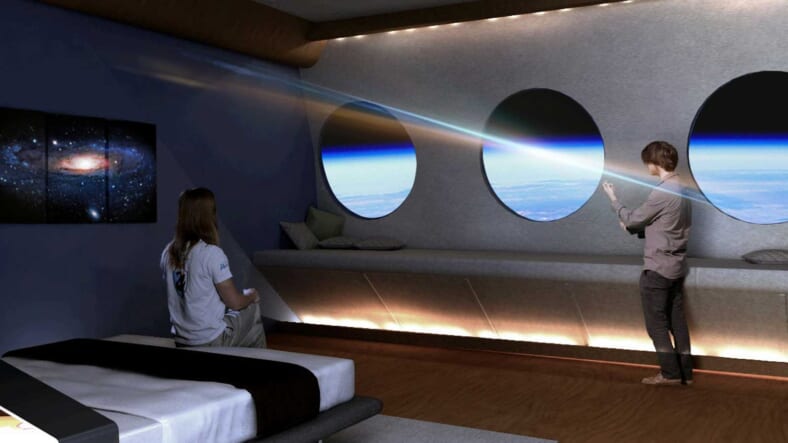 Forget sleeping under the stars, how about sleeping above the Earth? That’s what the Gateway Foundation’s Von Braun Space Station, the very first space hotel, promises to offer.

The ultra-futuristic design consists of three rings. An inner structural ring serves as a docking hub for unloading passengers and cargo. An outer structure ring allows for patrons to move throughout the station freely.

Both of these double as structural supports the “Habitation” ring, which is loaded with different entertaining modules.

One has a full-service kitchen, restaurant and bar to provide guests with the type of dishes and drinks they’d expect from a luxury cruise ship or destination resort.

Another has an assembly area for everything from concerts and shows to educational seminars, as well as a a gymnasium that offers low-gravity basketball, low-gravity trampolining, and rock climbing, according to Travel and Leisure.

The Habitation ring also houses the crew in a module that’s configurable for gravity and micro-gravity living. Privately owned modules will be rented as villas with seriously stunning views of the world’s curvature. In mock-ups, the rooms have a trendy minimalist decor.

Much of the technology will be borrowed from what’s already used on the International Space Station. Toilets and showers will operate much like they do on Earth, and drinking water will be imported from our planet.

“Eventually, going to space will just be another option people will pick for their vacation, just like going on a cruise, or going to Disney World,” senior design architect Tim Alatorre told Dezeen.

“The goal of the Gateway Foundation is to have the Von Braun operational by 2025 with 100 tourists visiting the station per week,” he added.

Come 2030, and there could be two of these stations in orbit, each of which could host 200 tourists per week and accommodate at least 500 permanent tenants. A maximum of 10,000 people could visit per year.

The cost of a stay at the Von Braun Space Station hasn’t been revealed, but it’s expected to be sky-high for the first years of operation before dipping down into a more reasonable price range.

Where do we make a reservation?