Made with metal from an actual Spitfire shot down in World War II. 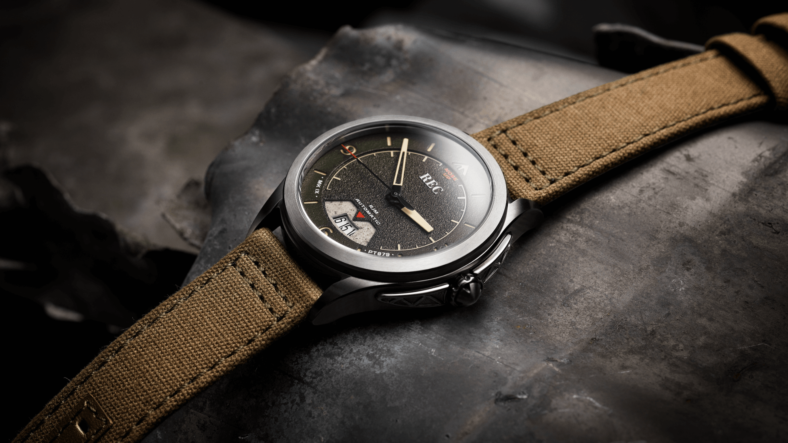 When style and history combine, the result is often understated elegance like this: The RJM Collection from REC.

The precision and elegance in RJMs 01,02, and 03 look back to World War II, and the iconic fighter planes that helped win the war, the British-made Spitfires. The watches are made with metal salvaged from an actual warplane downed in WWII.

The Spitfire was the warplane of choice for the UK’s Royal Air Force and many other Allied nations in the Second World War, including Soviet Russia. The Russians probably flew more of them than any other country, and, as a result, they lost more pilots.

A virtually brand new plane, Russian call number PT879, was recovered by a farmer in 1945 after it found itself on the losing end of a dogfight. It was put in storage and through the years eventually passed along to Peter Teichman, who has made something of a career out of his love for wartime planes.

Teichman’s Spitfire provided the metal to create the RJM Collection. The history folded into this series doesn’t stop with just the metal; RJM stands for R.J. Mitchell, who was the legendary fighter’s chief designer.

The metal that goes into creating the watches comes from parts pulled out of the Russian plane as Teichman works on restoring it, with REC ultimately planning on selling about 4,000 watches. That number may fluctuate, depending on just how much metal is replaced during the restoring process.

Given the legacy embedded in these timepieces and the relatively limited size of the collection, RJM watches are surprisingly affordable at $1,295.