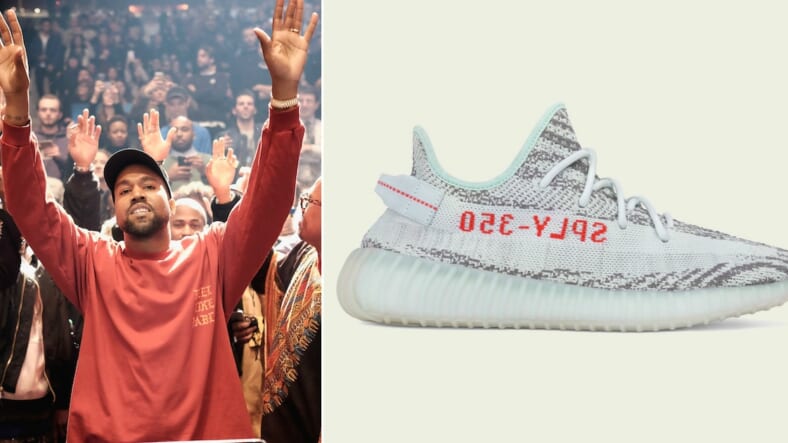 No matter how you feel about Kanye West, there’s no doubt that the mercurial hip-hop heavyweight is a street style powerhouse.

Ever since he collaborated with Adidas for his highly coveted and purposefully hard to find Yeezy sneakers, the buzzy line has arguably become the coolest brand in athleisure, upending Nike‘s decades-long reign of style supremacy among collectors.

But hey, even if you call bullshit on that, consider that Scott (Lord) Disick, Kanye’s fellow Keeping Up With the Kardashians star and current Sofia Richie boyfriend, unsurprisingly credited West with rebooting Adidas in a recent interview with Complex (at the 3:00 mark).

“It’s because of Kanye,” Disick says of Adidas’ resurgence among sneakerheads.

So there you have it.

Anyways, the latest Yeezys that hypebeasts will surely reach for this holiday season is the YEEZY BOOST 350 V2 “Blue Tint,” a model that’s been around but this time with light blue accents.

There’s a frosty light blue around the upper, heel tab, sockliner and BOOST unit, and the red detailing stiched onto the variating greytone Primeknit adds an extra pop.

These bad boys will be available on Saturday, December 16 in stores for $220, but expect prices to surge once vendors begin reselling them. Reservations are now open for the Confirmed app.

Other colorways of the YEEZY BOOST 350 V2 have recently been made available. Check out some more recent drops, below.

They’re all technically “sold out,” but a quick search online yields results from resellers. Just prepare to drop as much as $700.