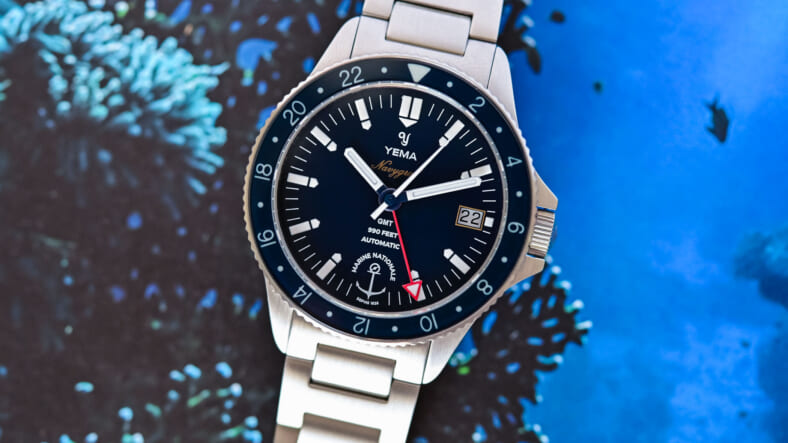 In watchmaking and in life, what goes around comes back around. Or at least, that’s what Yema, the heritage French watchmaking company, has achieved with its newest watch for the French Navy. The company’s original “Superman” Watch was used by the French Air Force, and the new Yema Marine Nationale Collection continues the Yema tradition by sea, not by air.

Yema’s watches have been worn across the globe in yachting races and on rally tracks, and the legendary brand is going even deeper this time. Its roots date back to 1948, when Henry Louis Belmont launched the company nearly two decades after graduating from watchmaking school in France (as legend has it, the name of the company was dreamed up in a school contest organized by Belmont).

Luckily, the Marine Nationale Collection nods to that illustrious history while also carrying forward modern watchmaking at its finest. The collection starts at $349 and also includes a sleek women’s watch, but it’s the array of functional, rugged dive watches that have really caught our attention.

The Yema Navygraf Marine Nationale Quartz ($399) is an affordable dive watch that’s soon to be a favorite for outdoor excursions and deep sea dives, built to military-grade specifications and equipped with a single-pass, blue-and-white strap as a secondary option.

The Marine Nationale logo is placed at the 6-o’clock dial marking, while the indices are fashioned in the form of exclamation points in a nod to the 1970s Navygraf model. For those who want to step things up, the Navygraf Marine Nationale ($749) forgoes the quartz movement and instead features Yema’s in-house Caliber YEMA2000 “No-Date” with a 42-hour power reserve.

Last but certainly not least, the collection also includes a limited-edition GMT watch with a visually striking red seconds hand. The GMT In-house Caliber YEMA3000 is what sets this watch apart, featuring the ability to tell time in three time zones. Limited to just 1,000 pieces, it retails for $1,049, a steal when you consider that it’s the first GMT watch in the history of the French Navy.

When you want to dive deep without worrying about what’s on your wrist, you want a small piece of durable history from Yema.