The underwater lensman and dive watchmaker seek to raise awareness of ocean conservation. 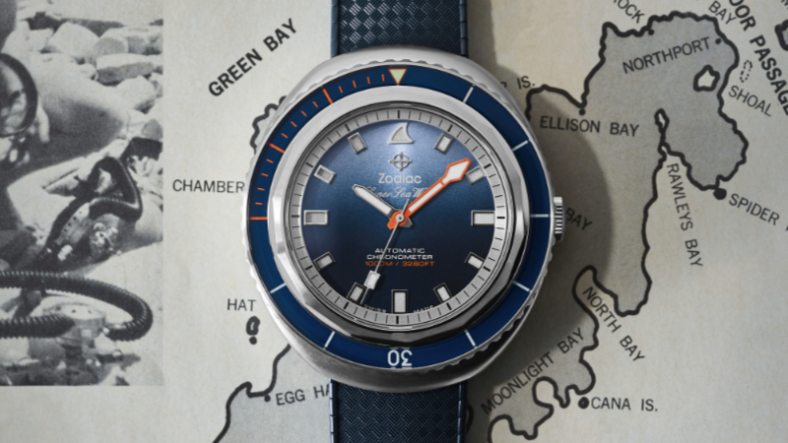 The Super Sea Wolf launch coincides with a new partnership between the watchmaker and SeaLegacy, an organization that seeks through expeditions to travel the oceans and tell “powerful visual stories that move people from apathy to action.”

Zodiac will help fund a 2019 SeaLegacy expedition to the reefs of East Timor, where researchers and documentarians will both study and, according to a Zodiac news release, “document the beauty and fragility of coral reefs.”

The new Super Sea Wolf was created with Andy Mann’s own design aesthetics as well as his goal of creating worldwide awareness of the efforts being made to preserve the ocean’s ecosystem.

Steve Evans, the executive vice president of Fossil Group—they own the Zodiac brand—said in the announcement that his company is proud to partner with Mann “as he embodies the spirit, purpose and adventure that represents the best of Zodiac.”

“We have realized throughout our legacy of making dive watches,” Evans continued, “how important it is to protect the oceans we want to explore.”

Andy Mann traveled to Switzerland to assist in the Super Sea Wolf’s design.

It bears Zodiac’s distinctive orange “blaze” color on the hands and bezel and along with its Swiss movement, the watch permits diving as deep as 1000 meters (3,280 feet).

The bezel and the dial are also luminous to allow for reading in the dark, and for the first time ever Zodiac is launching the Super Sea Wolf 68 with a three-row steel bracelet.

To recognize Andy Mann’s interest in photographing endangered species like the white tip shark, this Super Sea Wolf has a shark fin at the 12 hour mark that was drawn by Mann himself. On the back of the watch case, Zodiac has etched a shark from a photo originally taken by the photographer.

A shark photo bearing Andy Mann’s autograph comes with every purchase and the watch is boxed in an airtight case manufactured with up to 50% recycled plastic. Two extra bands are included as well as Zodiac stickers and a diver’s logbook.