Hit the rails in style while traveling to gorgeous natural destinations. 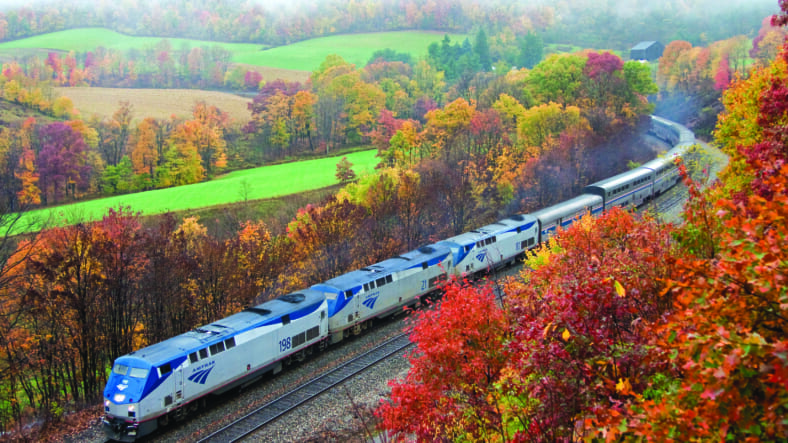 Several National Parks that can be easily reached via Amtrak, which serves over 500 destinations in 46 states and three Canadian provinces, and offers private rooms for discerning travelers seeking safety, space, and privacy. The rooms feature seats that can be converted into beds, free WiFi, and wide windows that offer sweeping natural views.

Train passengers can bring bikes and fishing or camping gear on board so they are fully prepared for the adventure awaiting them. They don’t have to worry about bag limits. And the size of the rooms–which benefit from heightened cleaning protocols in the wake of the pandemic–can accommodate solo travelers, couples, and families alike. .

En route daily between Chicago, Seattle, and Portland, the Empire Builder allows travelers to experience the rugged splendor of the American West, from major portions of the Lewis and Clark trail to Big Sky Country in Montana. Passengers on this route can stop at the East Glacier station at the edge of the “Crown of the Continent,” Glacier National Park. Visitors have access to more than 130 lakes, five National Historic Landmarks and an abundance of wildlife, and more than 700 miles of hiking options among the glacier-carved peaks and valleys.

Widely regarded as one of the most picturesque train routes, the Coast Starlight travels each day between Seattle and Los Angeles, passing through Portland, Sacramento, the San Francisco Bay, and Santa Barbara along the way. A stunning highlight along the route is Crater Lake National Park. It’s just off of the Klamath Falls stop in the Cascade Mountains of southern Oregon. Crater Lake is the deepest lake in the United States and the seventh deepest in the world. The park is over 183,000 acres and offers endless possibilities to hike, camp, and take in the natural beauty of the Pacific Northwest.

The Grand Canyon on the Southwest Chief

Passengers on the Southwest Chief are immersed in the stunning geography of eight different states between Chicago and Los Angeles. The Chief passes through Kansas City, Albuquerque, Flagstaff and many more along the way. The Flagstaff, AZ stop provides shuttle service to the Grand Canyon, as well as Thruway bus connections to the Grand Canyon Railway, allowing passengers to easily cross this one-mile deep, 277-mile long and 18-mile wide natural wonder.

Traveling each day between Chicago and San Francisco, this cross-country adventure showcases the bounty of natural beauty North America has to offer, from the rugged Rocky Mountains and snow-capped Sierra Nevadas to the wide-open plains of Nebraska and Denver. Passengers can stop at Grand Junction which serves as a base to explore the impressive desert landscape that is Canyonlands National Park. Carved by the winding Colorado River, the park is an impressive landscape of canyons and mesas, divided into four districts by the Green and Colorado rivers. For instance, Horseshoe Canyon Unit offers stunning Native American rock art panels, while Island in the Sky offers expansive views and a variety of hiking options.

Shenandoah National Park on the Crescent

Passengers on the Crescent experience firsthand the beauty and heritage of the American South as it travels between New York and New Orleans. Those looking to truly escape can hop off the train at the Charlottesville station just outside of Shenandoah National Park. Extending along the Blue Ridge Mountains, the park offers 200,000 acres of sweeping views, cascading waterfalls and hiking trails.

Running between DC and Chicago, the Capitol Limited follows a historic route through the Potomac Valley into the Allegheny Mountains. History lovers need to see Harpers Ferry station in West Virginia, a ten-minute walk from the site famous for John Brown’s 1859 raid on the First Federal Arsenal. Today, the park is at the confluence of the Potomac and Shenandoah rivers and offers over 20 miles of hiking trails, including four-mile hikes among Civil War battlefields. Wildlife enthusiasts will also enjoy the park’s 170 bird species and 30 mammal species.

The prices above are starting costs for both private and coach tickets for each route. Customers who book private rooms are entitled to a range of amenities and extras. These include complimentary meals, lounge access at major stations, a Sleeping Car attendant, and a private bath complete with fresh towels and linens.

For a full breakdown of private room options and amenities as well as booking, click here: Amtrak.com.