“We want a sustainable future for aviation and innovation is part of that.” 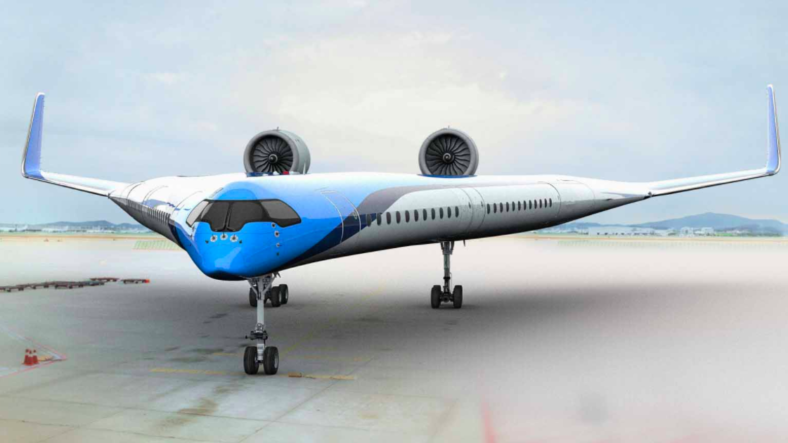 KLM—in cooperation with the Delft University of Technology (TU Delft) in the Netherlands—has for the first time successfully tested a scale model of a “Flying V” aircraft design. This trial run could point to a sea change for conventional air travel in the near future.

The KLM and TU Delft 10-foot test plane with its design inspired by the iconic Gibson guitar favored by the likes of Eddie Van Halen is essentially the next big step in the careful process of developing this hotly-anticipated upgrade to our idea of what a passenger plane should be.

In a press release, KLM provided a concise description of the potential in this new plane:

The Flying-V is a design for a very energy-efficient long-haul aircraft. The design of the aircraft integrates the passenger cabin, cargo hold and fuel tanks in the wings, creating a spectacular V-shape. Computer calculations have predicted that the improved aerodynamic shape and reduced weight of the aircraft will reduce fuel consumption by 20% compared to today’s most advanced aircraft.

Less weight and improved fuel consumption and aerodynamics are three of the industry’s holy grails.

TU Delft assistant professor of aerospace engineering Roelof Vos said in a statement that his team worried “that the aircraft might have some difficulty lifting-off since previous calculations had shown that ‘rotation’ could be an issue.”

However, Vos’s “team optimized the scaled flight model to prevent the issue but the proof of the pudding is in the eating. You need to fly to know for sure.”

And fly they did. Running the remote-controlled model they achieved a takeoff speed of approximately 50 mph. The test reportedly went well regarding flight speeds and thrust, but experts also found reasons to tweak the Flying V’s center of gravity to provide more precise telemetry.

KLM President and CEO Pieter Elbers said that this “design fits within our Fly Responsibly initiative which stands for everything we are doing and will do to improve our sustainability.”

“We want a sustainable future for aviation and innovation is part of that,” Elbers said.

The next steps, according to a KLM press release, include powering “the Flying V on sustainable fuel” such as liquid hydrogen.

It’s a 50-foot model today, but once all the bugs are out, this rock and roll design may be taking off with a full complement of passengers from a runway near you before you know it.