Billionaire Richard Branson’s company is gearing up to take tourists into outer space. 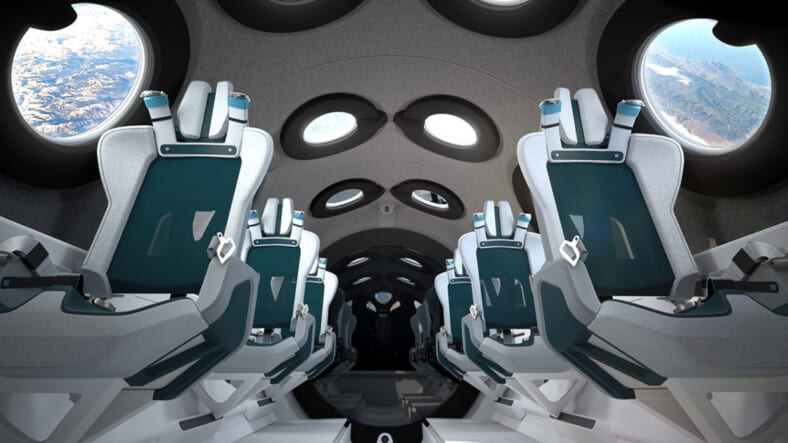 It’s a great time to dream about traveling into space. Billionaire Richard Branson is ready to fulfill that dream for those who can afford it, and he’ll send his Virgin Galactic customers soaring through the stratosphere in style with the VSS Unity, also known as SpaceshipTwo. Virgin recently unveiled a video and photos of the spacecraft’s interior. Watch below.

Virgin Galactic worked with Seymourpowell, a London agency specializing in “strategic design & innovation consultancy,” according to the company’s Instagram. Together they designed a spaceship interior meant to engender “a level of intimacy” among the crew of six.

And truly, it looks like an especially well-appointed luxury charter flight, with 3D knit seats from Under Armour that can recline while astronauts are under heavy G-forces.

Richard Branson explained that the Unity‘s “cabin has been designed specifically to allow thousands of people like you and me to achieve the dream of spaceflight safely.” Branson said he found that “incredibly exciting.” Further design features that will enhance that experience include “Halo” windows lined with LED lights and multiple cabin cameras that will assist passengers in taking photos and videos to post on social media. In the rear of the Unity is a mirror large enough for passengers to see themselves floating in zero gravity once the ship is in orbit.

Michael Colglazier is the CEO of Virgin Galactic, and he said the cabin is set up to “both facilitate and elevate a uniquely profound and transformational journey for the thousands who will fly.”

If it’s long been your dream to travel in space, you can join what Virgin Galactic calls its “Spacefarer” community. A refundable $1,000 deposit puts the future astronaut at the front of the line for spaceflight reservations. Learn more at virgingalactic.com.