This Private Villa Is Grenada’s Most Exclusive Escape

The $25,000-per-night getaway is what vacation dreams are made of. 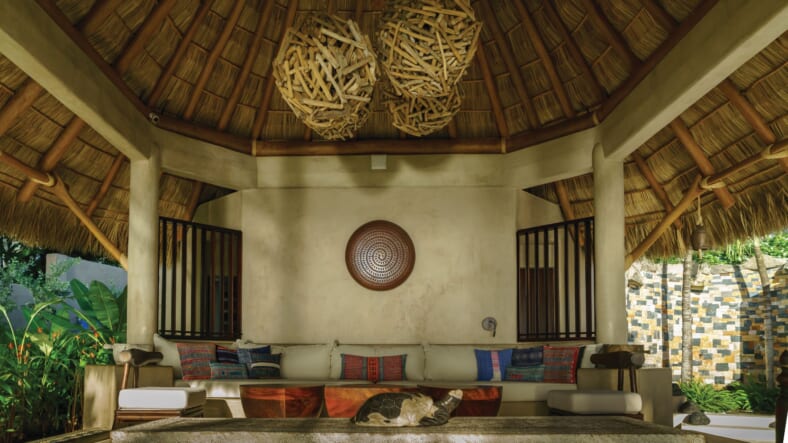 Twelve years in the making, Grenada’s new luxury escape, Solamente Villa, is set to welcome its first guests in time for the forthcoming seasonal festivities. The exclusive retreat on the island’s stunning southern coast was originally built as a private residence nearly 50 years ago, and it retains that spirit while offering a world-class “barefoot luxury” experience courtesy of a multimillion-dollar renovation project.

With rates starting at $25,000 per night, it will only be available for five-to-six weeks per year and is expected to attract the likes of royalty, celebrities and billionaires who seek the privacy and security that only a private villa can provide, yet with all the amenities of a five-star resort.

Expanded to 25,000 square feet by acclaimed Mexican architect Manuel Mestre, the residence now features eight suites capable of accommodating up to 17 guests in sybaritic luxury, yet the vibe at the ecofriendly estate is more holistic than hedonistic. “Solamente is a happy home, you feel this energy from the moment you step foot on the property,” pioneering Grenada developer Sherry Azadi tells Maxim.

Azadi’s sister Suzy Azadi, with whom she is a partner in New York City-based Azadi Design, oversaw the interior of the villa, which is adorned with unique pieces of art and furniture from around the world, combining with natural materials used in its construction for a warm, welcoming and harmonious effect.

The all-inclusive Mexican-style property with Caribbean flair is a fitting setting for the gracious decor, with its 100-foot infinity pool Solamente Villa will soon be Grenada’s most alluring and exclusive escape matched by 150 feet of private white-sand beach and a reef just off shore that makes it the most majestic private residence on the Caribbean island known for its pristine beauty.

Guests will be attended to by a staff, known as guest ambassadors, numbering 15, including three chefs, a personal trainer, butlers, housekeepers, security guards, and chauffeurs. And there will also be a spa, tennis court, Technogym-equipped workout room and extensive outdoor spaces including two thatch-roofed palapas and a private dock with a motorboat.

Sherry Azadi says the original plan was to tear down the existing structure and start anew, but according to Mestre, “the spirit of the original owner [an American heiress] was too strong…. He said, ‘I could hear the laughter, joy, and happiness in the walls, and this is why I respected the wishes of Solamente’s destiny.’ He felt compelled to honor the house.” She adds, “the interior and architecture are in a perfect balance like a dance to beautiful music. One floats in Solamente; nothing is boring, and beauty is presented in every turn and hour.”

To assemble the eclectic, contemporary decor, “we traveled around the world collecting piece by piece,” Azadi notes. Hence items sourced from Grenada itself now live in harmony with others from Africa to the Middle East, and many of them come with inspiring backstories. “All of this has true meaning,” Azadi says. “There’s something very energetically beautiful about every piece and everything that was sent here.”

Of equal importance is truly impeccable service, because “that is actually not such an easy thing to find,” Azadi says. “I travel around the world  extensively, and whether we rent villas [or] stay in the best five-star hotels, quite honestly service is the one thing I always find lacking.” To that end Azadi brought in Marie-Claude Metrot, one of France’s top luxury hospitality consultants and an expert on protocol and etiquette, who has held numerous posts including Quality Director of the legendary Ritz hotel in Paris, and whose clients have included the likes of Karl Lagerfeld and LVMH billionaire Bernard Arnault. Metrot says that the level of service at Solamente is “haute couture.”

A defining moment in Azadi’s quest to provide an impeccable haven for celebrities came when she ran into Roger Federer and his family at a famous five-star hotel in Sardinia. “They didn’t have a moment to breathe when they were in the hotel, because everyone jumped on them. They were dying to get autographs, pictures with the children and so forth. And so Federer and his family were quickly whisked off to a yacht. And I thought it would be incredible if we created a home where you have [the atmosphere of] a yacht but on land, with all of its luxury, security and privacy.”

The cuisine is certainly expected to pass muster with those used to Michelin stars. The property’s executive chef, Dexter Burris, a native of Grenada, was brought over from Calabash Luxury Boutique Hotel, one of a handful of properties from the famed Relais & Châteaux association in the Caribbean, which is known for fine food and wine. Azadi says the culinary offerings will be truly varied depending on what is fresh and in season, both at the property’s own farm garden and from local producers and fishermen, with an emphasis on local seasoning and cooking styles.

Grenada, known as the Spice Isle, is the perfect place to expand your palette and be at one with nature. “I think what makes Grenada so magical is the fact that it’s an untouched island in so many ways,” Azadi notes. “There are still monkeys in the trees…. Some of the roads are quite rugged, and there’s this purity about it [and] an innocence compared to the other islands. It’s people are incredibly kind and very beautiful. And there is no other private home on this island of this caliber.” Which enables Solamente to be the kind of place where “you can truly refresh your soul and rejuvenate yourself.”

Which is why Azadi plans to retain it for personal use most of the year. “Obviously Solamente is going to be rented to an exclusive group of people,” she says. “But it’s not so much about the money as it’s about the experience. And this is what’s so important. Solamente is not really a business, [and] I’m not going into it to make a huge profit. It’s more that I’d like to share it with certain people. And that is truly the vision for it.”