Ariana Grande Wore a Tiny Dress to Aretha Franklin’s Funeral, And Twitter Is Losing It 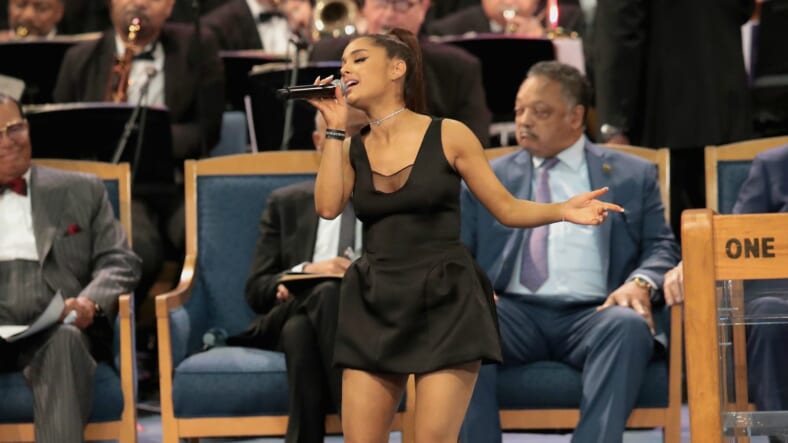 This morning at Aretha Franklin’s star-studded funeral, pop sensation Ariana Grande was in attendance, where, naturally, she sang an Ariana Grande-infused version of “Natural Woman.”

Aside from her performance, another noteworthy happening was that she was mistaken for a Taco Bell menu item, which is absolutely hilarious. Bishop Charles H. Ellis III, who was co-officiating the Queen of Soul’s funeral service, said he totally thought the singer was something you could order from the fast food chain.

“When I saw Ariana Grande on the program, I thought that was a new something at Taco Bell.” Ha!

However, the thing that caught the internet’s eye the most was her attire, since she showed up in what can be described as a “club dress” that, by normal standards, may not be super appropriate for a funeral. You know, out of respect for the recently deceased. And because you’re in a church.

As expected, Twitter had some strong thoughts about it.

….who let Ariana Grande wear the miniest mini dress she could find to Aretha’s funeral?

Ariana Grande came to Aretha’s funeral with a club dress on. Where are the church mothers when you need one? #ArethaFranklinFuneral

Ariana Grande baby that’s not what you wear to a funeral #ArethaHomegoing pic.twitter.com/LZgv6yUrNJ

Ariana Grande is 5 feet tall at best and still managed to find a dress that barely covered her ass for the house of the Lord, waouw 😭

On a different note, somebody clearly really enjoyed everything about the performance.

But the drama didn’t end there. On Friday, the Bishop who officiated the funeral apologized to Grande for awkwardly touching her onstage and making a joke about her last name.

Bishop Charles H. Ellis III led Franklin’s funeral and awkwardly greeted Grande on stage after she performed “(You Make Me Feel Like) A Natural Woman.” Images of the moment showed Ellis’ hand holding Grande well above her waist, with his fingers pressing against one side of her chest.

The preacher apologized in an interview with The Associated Press at the cemetery where Franklin was interred late Friday.

“It would never be my intention to touch any woman’s breast. … I don’t know I guess I put my arm around her,” Ellis said. “Maybe I crossed the border, maybe I was too friendly or familiar but again, I apologize.”

The bishop also apologized for that Taco Bell joke during Grande’s appearance.

Ellis also apologized to Grande, her fans and Hispanic community for making a joke about seeing her name on the program and thinking it was a new item on the Taco Bell menu.

“I personally and sincerely apologize to Ariana and to her fans and to the whole Hispanic community,” Ellis said. “When you’re doing a program for nine hours you try to keep it lively, you try to insert some jokes here and there.”