The fashion giant was forced to apologize. 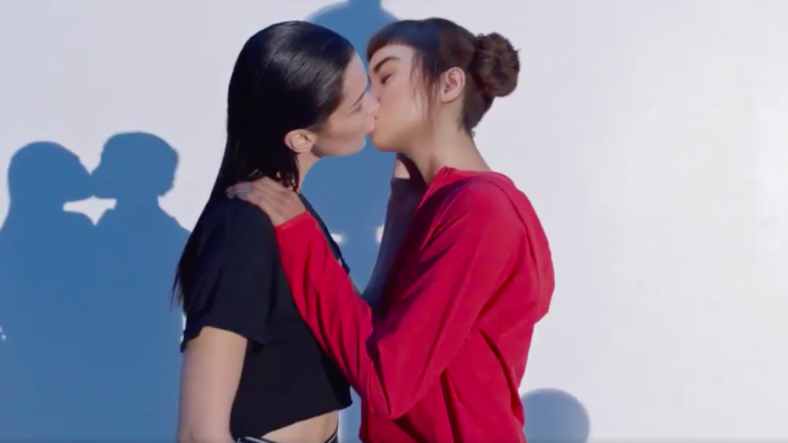 That’s the internet’s conclusion, anyway, after the supermodel starred in a starkly simple and admittedly kind of odd Calvin Klein ad for a t-shirt.

In the spot Hadid shared a kiss with Lil Miquela, a.k.a. Miquela Sousa, a.k.a. a damn made-up person.

As in, she doesn’t exist.

After Lil Miquela regained ownership of her Instagram, she shared a message to her followers, admitting that she was “not human” and claiming that she was created by a Silicon Valley organization before being freed by a company named Brud, which, unlike Cain, is an actual organization with real humans on staff. She also promised she would soon share more information about her creation and her purpose.For now, it’s clear that Lil Miquela is not human—but to her 1 million followers, she’s as real as they want her to be.

Even though Bella Hadid was literally kissing a digital figment of someone’s imagination (Lil Miquela is sometimes referred to as a robot as well), the fact she is straight led to a backlash that eventually forced Calvin Klein to apologize for the whole mess.

Because welcome to the Internet in 2019.

a corporate brand will show lil miquela and bella hadid making out but not an actual gay couple https://t.co/qonqi099nZ

There are plenty more tweets where those came from.

The gist of it all was even if Lil Miquela is a CGI creation, having her make out with straight model Bella Hadid in an ad was considered offensive because it played into society’s longtime love of objectifying lesbian relationships.

Calvin Klein seemed to understand what they’d done, and issued an apology on Twitter.

Here at CALVIN KLEIN, we welcome all types of constructive feedback from our community. We see your comments and we appreciate them. We'd like to offer our thoughts in response to comments on our campaign video featuring Bella Hadid and Lil Miquela. pic.twitter.com/OIcIekyR9K

“The concept for our latest #MYCALVINS campaign is to promote freedom of expression for a wide range of identities, including a spectrum of gender and sexual identities,” read the apology, “This specific campaign was created to challenge conventional norms and stereotypes in advertising. In this particular video, we explored the blurred lines between reality and imagination.”

The statement went on to say that the company understands and acknowledges “how featuring someone who identifies as heterosexual in a same-sex kiss could be perceived as queer-baiting. As a company with a longstanding tradition of advocating for LGTBQ+ rights, it was certainly not our intention to misrepresent the LGTBQ+ community. We sincerely regret any offense we caused.”

To be clear, Lil Miquela doesn’t appear to be a walking, talking robot who lives in the 3-D world. She’s a virtual creation. Bella Hadid wasn’t even smooching weirdly lifelike silicone; she was kissing someone in a motion capture suite or something like that.

Still, it’s how it looked that mattered, apparently.

In the end Hadid still got a check and it’s highly unlikely anyone will remember this a month from now.

At least not until there’s an actual, physical robot involved. That’s when things will get really weird.