The Internet Is Furious at Brie Larson for Touching a Dolphin

The beautiful Oscar winner has been accused of promoting “animal cruelty.” 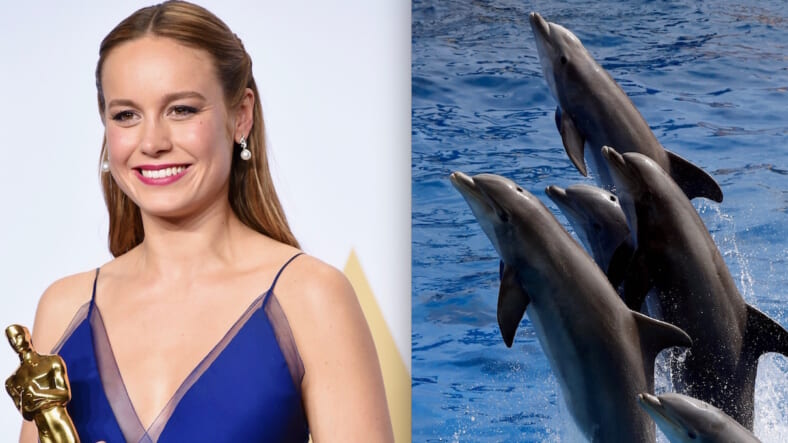 Gonna go out on a limb and say that if I were a dolphin, a majestic marine mammal confined to captivity, I’d be pretty dang pleased if a future Oscar winner showed up at my tank and rubbed my belly. Just look at how serene this fella looks when actress Brie Larson did just that back in 2004:

But when our girl Brie shared this joyful #FBF on Instagram, she met the wrath of countless keyboard warriors who decried animal cruelty, insensitivity, etc.

“Those animals are being enslaved for your entertainment. Just saying,” one user wrote.

“This is torture for the animals!” another cried.

“What would Jacob Tremblay think!?” some probably wondered.

Realizing some hackles in the Blackfish camp were rising, Brie nearly immediately posted a stern-faced selfie accompanied by a lengthy apology.

Yo – it’s me again. I posted a photo previously that encapsulated a silly moment in my weird life. I forgot that through social media and random interviews you do not know all the facets of me and what my concerns are. We should be concerned about the well being of all animals. Yes, Dolphins. Along with every other creature. There are problems with animals in captivity. There are problems with animals living in the wild. It has always been a priority of mine to speak for those who cannot speak for themselves. I apologize if the photo appeared to endorse animal cruelty. I don’t believe any living thing deserves miss treatment. In the comments section feel free to discuss your thoughts, concerns, articles ANYTHING that can turn this into a moment of education for myself all who are interested. We gotta remember that we will make mistakes but we can learn from them, together. Much love.

Brie didn’t delete the original post (it got a lot of likes, in all fairness), but she did add “EDIT: I do not support animal cruelty” to the end of the caption.

It all feels like much ado about nothing, really. We’d ballpark that about 99.9% of Americans have pet a dolphin at an aquarium before, and Brie Larson is probably the least objectionable actress to come along in ages.

Even so, that wasn’t enough to get her out of hot water.