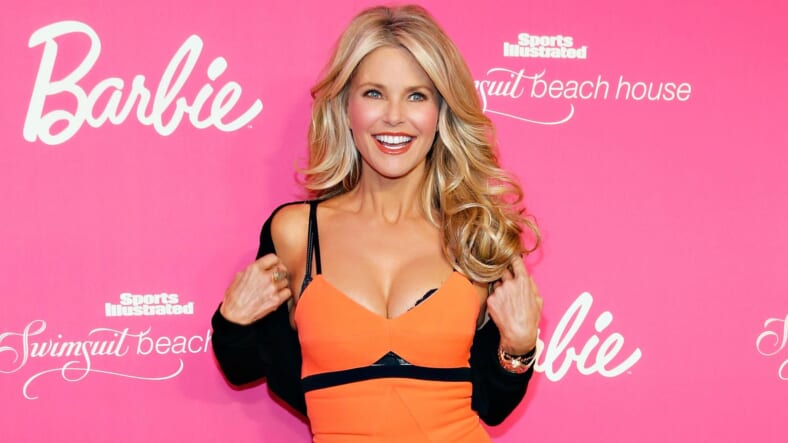 There aren’t many things that get better with age, and there are even fewer people. But 63-year-old supermodel legend Christie Brinkley proves once again that she’s a beautiful exceptions to the rule in a preview of the upcoming Sports Illustrated Swimsuit Issue that she posted to Instagram.

Yes! I am excited to announce that I am back in @si_swimsuit ..I figured with my gorgeous daughters @alexarayjoel and @sailorbrinkleycook by my side whose going to be looking at me! Oh and My kids think I walk on water, so let's not mention the apple box concealed just under the surface. For a preview check out @people.com ..and thank you Sports Illustrated for sending the powerful message that good things come in packages of every size and we do not come with an expiration date! 🌸🌴psI can’t wait to see everyone at VIBES on Feb 17th and 18th in Houston! #proudmomhere!

As if we weren’t already awe-struck by her gorgeous looks, Brinkley appears to be standing on water as she poses alongside her two beautiful daughters.

She thanked SI in the accompanying caption, “for sending the powerful message that good things come in packages of every size and we do not come with an expiration date.” Agreed!

Both her daughters posted some head-turning photos to their Instagram accounts as well. Singer Alexa Ray Joel, daughter of Brinkley and pop pianist Billy Joel, uploaded this beaut.

~'Twas a most humbling and rewarding HONOR to be a part of your February issue!🌹👑🖤 Thank you @si_swimsuit & @mj_day for making me feel so at home. This was a lesson in learning to let go, take the plunge, and embrace myself from both the inside AND out- which is something I struggle with each and every day. My purpose is to now pass along this lesson of unconditional self-love and self-respect to every woman who's willing to listen. Once again, from the bottom of my heart… Thank You.~

It’s been nearly 50 years since Brinkley first began adorning the covers of magazines, but she’s undoubtedly still got it.