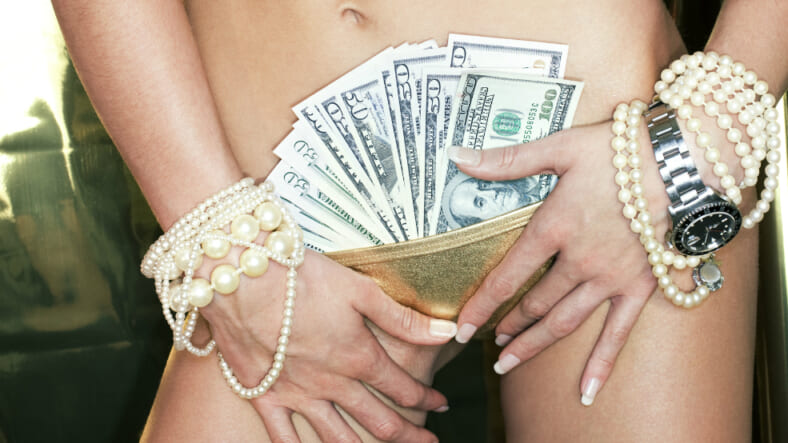 Is being a sugar baby considered prostitution? Like when hot young women give rich old dudes their jollies in exchange for cash and Chanel bags and other expensive stuff?

Yeah, when you think of it that way, maybe it is prostitution. No, it definitely is. Or maybe not. It depends on who you ask.

If you ask 20-year old college student and actual sugar baby Emily Bulea, she’d say it’s absolutely not prostitution, but rather a fabulous and respectable way of living. *sigh* You keep telling yourself that, sweetie.

“I essentially go on dates for money,” she says, adding that it’s the best way to make her college experience so much more luxurious and enjoyable.

“It all kind of started as a joke between me and some friends. We’d always joke about having a sugar daddy spoil us, and take us on vacation. One day I was tempted to make an account, and that’s kind of how I got started,” she says.

Clearly the temptation was too much, so here we are. For the past year, Emily has been going on dates with wealthy older men who pay for her fascinating, wonderful, bleach-blonde company in the form of perfume, $500 Swarovski crystal bras, clothes, and (maybe?) envelopes stuffed full of cash left on her nightstand .

“Personally, I don’t sleep with sugar daddies. As far as physical contact goes, I think it’s okay for a friendly hug, or to have your hair touched,” she says, making sure we all know she is definitely not prostituting herself for cash. You know what else doesn’t require physical contact? Flashing the daddies.

She says people immediately assume she’s an escort, but that’s not the case. No way, no how. Nuh-uh. Escorts accompany rich men to restaurants and vacations and stuff. Emily doesn’t do that. Oh wait…she does.

The coolest part of Emily’s life as a sugar baby is the fact that her boyfriend, Jack, is totally okay with his girlfriend going on dates with a bunch of old farts with sizable bank accounts who fantasize of doing her.

Better yet, her mother is also fine with the fact that her young child is a sugar baby.

Maybe one day one of Emily’s sugar daddies will leave a pamphlet about Jesus on her nightstand next to her envelope of money, and her entire life will finally make sense.

But until then, you do you, Emily Bulea.