“I was there making a political point. Why would people focus on what I was wearing?” 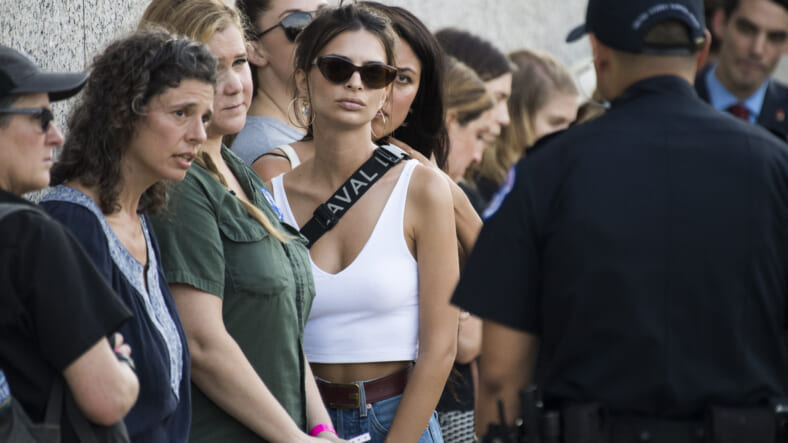 Earlier this year, supermodel Emily Ratajkowski was one of 302 people arrested in Washington, D.C., for protesting Brett Kavanaugh’s nomination to the Supreme Court.

“Today I was arrested protesting the Supreme Court nomination of Brett Kavanaugh, a man who has been accused by multiple women of sexual assault. Men who hurt women can no longer be placed in positions of power,” she captioned her Instagram post.

“Kavanaugh’s confirmation as a Justice of the Supreme Court of the United States is a message to women in this country that they do not matter. I demand a government that acknowledges, respects and supports women as much as it does men.”

But this being the internet, some online trolls blasted the supermodel for not wearing a bra while protesting, and now, EmRata is defending her right to go braless and protest without being held back by the confines of conventional undergarments.

In an interview with Stellar, she explained:

“I knew being there would be important and I knew some people would find it controversial but I never expected anyone to talk about why I wasn’t wearing a bra under my tank top.

“It was 32 degrees, I was marching through D.C. in jeans; my outfit seemed completely normal to me… And I was there making a political point. Why would people focus on what I was wearing?

“I’ve learned to separate social media comments and trolls from real life,” she added. “And I don’t let the validating, flattering comments impress on me too much, which makes it easier to [ignore] the negative ones, as well.”

Ratajkowki’s I Feel Pretty costar Amy Schumer was also protesting alongside her, and took to Instagram to defend the choice to go braless.

“People are trolling @emrata for not wearing a bra while she got arrested. Well for starters I wasn’t wearing a bra either,” Schumer wrote on Instagram.

“In the “what to wear when being detained for 4 hours on an 87 degree day after a 2 hour march” handbook. Bras aren’t recommended. Emily sacrificed herself fighting to protect women’s rights to choose what they do with their own bodies.

“Your comments are synonymous with saying what a woman wears insights bad behavior…You reserve your rage for the victims or a beautiful woman you’re threatened by.”

With that said, we already know the 27-year old beauty loves her breasts, which also explains why she wouldn’t want to put on a bra during the protest. In an interview with Marie Claire back in May, she said that her boobs are “the thing that makes me feel the most powerful. They’re a key to my sexuality.

“I love my boobs. I love other people’s boobs. Boobs are kind of great.”