Check Out the Hottest Looks From the 2018 Grammy Awards

Anna Kendrick, Rita Ora and Cardi B were among those who heated up music’s biggest night. 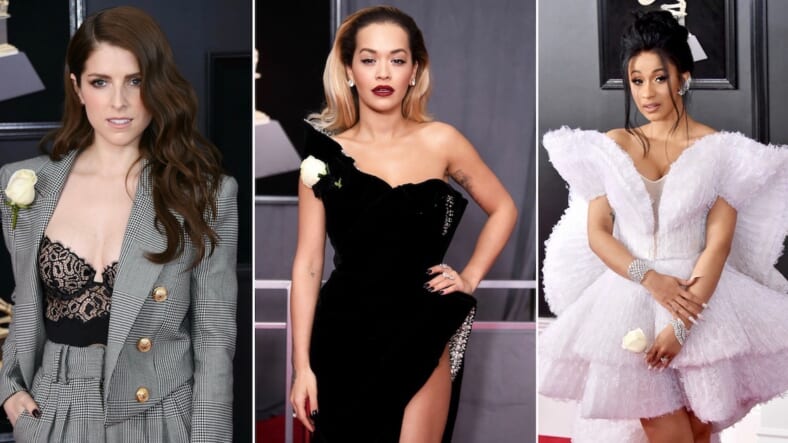 Pop superstar Bruno Mars and hip-hop royal Kendrick Lamar weren’t the only huge winners at the 2018 Grammy Awards. There were also plenty of red hot red carpet looks that showed that the biggest night in music still knows how to put on a show. Check out 14 memorable outfits from Sunday night’s festivities here:

There was nothing that could quite match Jennifer Lopez’s plunging Versace dress from 2000 or Lady Gaga hiding out inside a giant egg from 2011, but Cardi B, nominated for Best Rap Performance and Best Rap Song, looked like a hip-hop swan, and Anna Kendrick rocked a men’s-style suit jacket over just a bralette. (We can’t wait to see what Cardi wears at the 2018 Maxim Party next weekend in Minneapolis.)

Cardi B gave one of the most memorable red-carpet interviews in recent memory, telling E! host Giuliana Rancic that she was so nervous, she had “butterflies in her vagina.”

Lamar was lauded for his politically-charged opening performance, which featured a musical cameo from U2 as well as several intentional interruptions from the great Dave Chappelle, who later won Best Comedy Album.

It wasn’t the Miley Cyrus and Elton John duet of “Tiny Dancer” that everyone was talking about, although that was pretty sweet, too.

things bruno mars and cardi b did: THAT pic.twitter.com/OjuvlPrp9R

That solo rap from Cardi B was fire in every sense.

#BrunoMars accepting his award for “Song of the Year” at the #GRAMMYs pic.twitter.com/07okikJbGt

Check out a whole bunch of other winners here, courtesy of the New York Times:

Best Rock Album: “A Deeper Understanding” — The War on Drugs

Best R&B Performance: “That’s What I Like” — Bruno Mars

Best American Roots Song: “If We Were Vampires” — Jason Isbell, songwriter (Jason Isbell and the 400 Unit)