There’s a lot more than meets the eye for this sultry Arrow star. 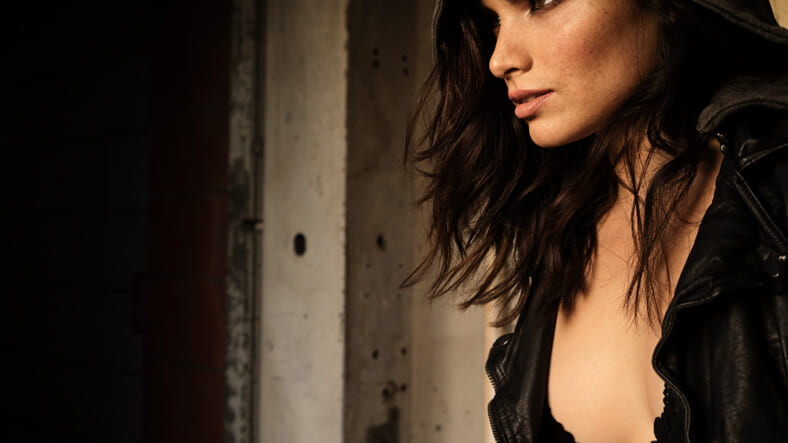 It’s hard not to fall in love with Katrina Law. The stunning brunette, who you’ll recognize from shows like Arrow and Spartacus: Blood and Sand, loves getting her hands dirty with different roles.

“Fortunately in my career, I’ve been lucky enough to bounce back and forth between different genres and I wouldn’t have it any other way,” she told Maxim. “As much as I love kicking and punching people in the face and the angst of unrequited love, I do love being goofy and running around making people laugh and getting my man or woman at the end of the day.” While the New Jersey native may enjoy comedy every now and then, it’s her role as DC Comics legend Nyssa al Ghul that has everybody watching. The independent female warrior born into a league of assassins has been prominently featured since season two of CW’s Arrow, providing Law with a run of storylines that have shifted her from outright menace to fan favorite anti-hero. Plus, as someone who plays by her own rules, the actress has been able to put her years of dance training (and her blackbelt in taekwondo) to good use. “It all plays heavily into the stunts that I do,” she told Maxim. “It makes it easy for me to pick up the movement and choreography.

Katrina is the perfect representation of what Nyssa should be, she claims. “Nyssa is just so kickass and badass that there have actually been times when I had to just stop and think about what I am doing as her character and then I giggle out of glee. It’s fun to be a comic book superhero/villain.”

Katrina filled Maxim in on grabbing her attention, a nice Chinese dinner, and what would happen if she hung out with ScarJo. 1. If you weren’t in the entertainment industry and you could do anything, no training required, what would you choose?I would be a park ranger in a national park or doing some kind of marine research. I love nature and being outdoors and I’m also an avid scuba diver. If I didn’t love acting so much, I think I could be very happy spending my time in the wild, taking on new adventures as they come my way.

2. Do you have a favorite curse word to use?I like to string them together. Like C*nt&ssMotherF@^kerSh%tBallP()(yD#$cheBag. I feel it adds a bit of an artistic flair to it.

3. What do you feel most sexy wearing?I feel sexiest when I am walking around in my man’s t-shirt and a soft pair of flannel pjs. Maybe it’s because I grew up as a dancer and an athlete, but I like to feel free to move in my clothing. And knowing that I am wearing something that is his.. beyond sexy. Plus, baggy clothes are easier to take off.

4. What’s your favorite part of your body?I like my hands. I think they are long and elegant. And I’m good with them..

5. How can a man get your attention?There are usual go-to’s of being a gentleman and opening doors, pulling out seats, etc. A great smile and good joke always goes a long way. But in general, I think a quiet confidence is what attracts me the most. You don’t need to tell me all about how awesome you are. Words are cheap. Be awesome and trust that I’m perceptive enough to notice.

6. Are there any ladies you’re crushing on right now?Scarlett Johansson, Angelina Jolie, Jessica Chastain are my top three. If we were drunk together, hot, bad things would happen. Like arson.

7. If you could do absolutely anything on a date, what would you do?An outdoor adventure of some kind (hiking, snowboarding, diving, boating) to fill up the day, followed by a romantically lit dinner (Mexican or Italian is always a good choice) and then some dancing.

8. How do you want your guy to be groomed?I love beauty in all forms and can appreciate a man for his personal style. But what I am most attracted to is a man with a little scruff, a short hair cut, and who smells like they just got out of the shower.

9. What would you say is your all-time favorite food?I love authentic Chinese food. The kind that only mom can make or the kind you find being sold from the food carts at the Night Markets in Taiwan. It’s savory, healthy, and it reminds me of home so it is also my comfort food.

10. So what’s next for you?As for what’s next, I have a few more episodes of Arrow coming up and I will also be making an appearance on ABC’s new sitcom Uncle Buck.