This gorgeous ‘Vampire Diaries’ starlet is an expert at bringing out her evil side. 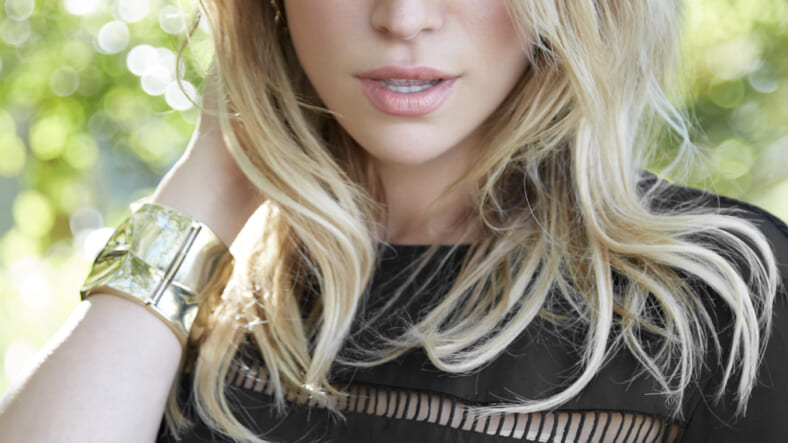 Teressa Liane always found the idea of auditioning to be terrifying. The beautiful Australian native didn’t appreciate the idea of film and performance until her later years of schooling, turning her attention towards drama and media classes. “Once I started taking drama, there was something about that safe, creative environment that I really thrived on,” she told Maxim. “From there, I took baby steps toward local plays, then amateur theater, and eventually I had the confidence to pursue it as a career in both stage and screen.”

Though extremely well versed in the world of theater, Teressa has begun transitioning from stage to screen. It was while developing her skills in her hometown of Melbourne that the blonde bombshell began to realize that she favored the more intimate relationship you develop when working in cinema. “As I continued to work on toning down my characters, I found myself getting addicted to the closer connection and power in smaller, subtle moments,” she said in regards to acting. “TV and film are holding my interests at the moment, and I’m having a lot of fun.”

And Teressa has been holding our interests for quite a while now, portraying the dark, seductive, and unpredictable vampire/witch hybrid, Mary Louise, on The CW’s The Vampire Diaries. She’s been gracing us with her presence ever since the show’s 6th season, and the newcomer fits in quite nicely with the talented cast. She may look sweet, but evil suits the starlet real well.

“I enjoy her most when she’s at her evil best,” Teressa told Maxim. “I’ve always been really interested in myths and legends, and the stories or things that cannot be explained. I think it’s very human to be curious about all of that, but also if there’s nothing real to base it on, it allows for a greater freedom in the storytelling. I love exploring the intrigue that comes with an unimaginable world that show is set in, and getting the audience to believe in it all with you… at least for a little while.”

Teressa talked to Maxim about about having a great butt, loving a little stubble, and exactly how to win her over.

1. If you weren’t acting and you could do anything else (no training required), what would you be doing?Feeding animals at the zoo. I like the idea of carrying a bucket, in khaki shorts, high fiving kids on the way.

2. What’s your favorite curse word to use?If you had asked me this two years ago, I would have said ‘c**t.’ My time in the United States has taught me to mind my company, and maybe just throw it around when I go home. In my defense, it’s MUCH less offensive, and can be perfectly appropriate and funny.. but only in Australia & the UK, apparently. I think it has something to do with the upward inflection that comes with the way we drop the word. It’s almost cute. With a U.S accent, it’s a very definite, slap of a word.

3. What do you wear to feel your sexiest?Matching underwear. As much as we’d like to pretend that’s standard, most of the time it’s not.

4. What’s your favorite part of your body?My butt. I’ve only recently started to appreciate that I’ve got major booty. LA has a very definite body type that everyone seems to think you should have, but I’m getting better at separating myself from all of that and remembering that not everyone has to look the same. It’s all about what works for your body and what makes you feel good.

5. How can a guy stand out and get your attention?State your name and purpose. Just be real! I’m impressed by someone that doesn’t open with what they think a girl wants to hear. A simple introduction can be very charming.

6. What would you want to do on an ideal date?I would look good, enjoy the conversation and laugh a lot. Anything that takes away from the feeling of a job interview.

7. What’s the worst pick-up line you’ve ever heard?“Life’s about moments, so live in the moment…” and it was sung! Vom!

8. Do you have a preference on a guy’s style?Depends on the face. I’m all about owning your own style. I am a sucker for a bit of stubble, though.

9. If you could work with any actor/actress, who would it be?(The late) Robin Williams, he was an absolute idol of mine, growing up. His warm, unpredictable energy was magnetic.

10. So what’s next for you?I’m currently working on The Vampire Diaries, which I’m loving every minute of! From here, I plan to keep working on film and TV; I’m excited to see what’s to come.