Exclusive: ‘Fuller House’ Star Jodie Sweetin Sizzles In Her Most Jaw-Dropping Shoot Ever

“It’s a side of me people haven’t seen before.” 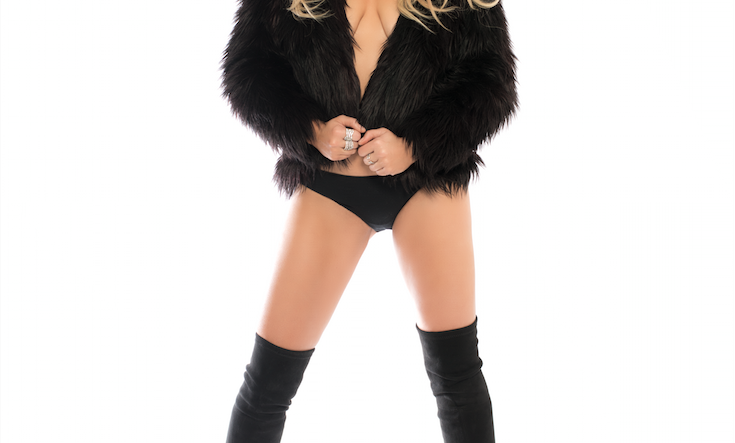 “Whatever happened to predictability?” asks the funky theme song to the sugar-sweet ’90s sitcom Full House. In the case of its star Jodie Sweetin, who recently posed for this scorching-hot photo shoot, it seems to have flown right out the window.

It makes sense that she wants to refresh her image, considering an entire generation watched her grow up on one of the most family-friendly shows in TV history. The 34-year-old has played middle child Stephanie Tanner for almost three decades now, first on the original show, and now on the updated Fuller House (the second season of which is currently streaming on Netflix). Her character’s catchphrase, “How rude!”, is right up there in the pop-culture pantheon with “Dy-no-mite!”, “Did I do that?” and “D’oh!”

Though her path from Full House to Fuller House wasn’t always smooth—she wrote a memoir, unSweetined, about her struggles with addiction and recovery—her determination to get her life back on track is truly admirable. We were very excited to get the chance to speak with Jodie about her sexy shoot shared exclusively with Maxim, the new season of Fuller House, and how growing up with Bob Saget as a father figure can really mess a girl up.

What inspired you to do this shoot?

I wanted to do something that was a departure from Stephanie, but still a part of who I am. I am an adult woman, and I think people kind of forget that when you’re so closely tied in with such a traditional family sitcom. At the end of the day, it’s fun to do something different. It’s fun to do something sexy and unique and a little more personal. When I got the opportunity to work with Glenn Nutley, who’s the photographer and also a really good friend, I was like, “Let’s just have fun and play with it.” And so we did, and they turned out really well.

You look great. How do you like to keep in shape?

It’s so hard with the holidays right now. I work out at least three times a week—I do a lot of Pilates. I also have a great personal trainer who kicks my ass. It’s not just about what I look like, though. The side benefits are, of course, you definitely look better, but for me it’s all about how I feel. That’s a huge reason I work out as often as I do.

Do you have a part of your body you’re particularly proud of?

It depends on the day of the week and what I’ve had for lunch, but I would say probably… well, my fiancé says I have a nice ass, so I’ll take that. I definitely don’t turn around and have no butt.

Do you think your fans will be surprised by the sexiness of the shoot?

Yeah, it’s a side of me people haven’t seen before, and it’s something people haven’t really recognized in me. In the first season of Fuller House, there were definitely some jokes about Stephanie’s attire. It’s been hinted at, but I don’t think people have ever seen me do a photo shoot like this.

Oh, I’m glad. I think for a lot of people, it’s their guilty pleasure. One of the things I’ll say about Full House and now Fuller House is that it’s television comfort food. It’s something you watch, and it feels really good and familiar and makes you happy, and you can watch it over and over again and never get tired of it. I love being a part of that. It’s really fun to know that so many people have grown up with it for the past 30 years.

How old were you when the original started?

Wow, so you must not have much memory before the show.

I really don’t. I was talking about this the other day, like, “I don’t have any memory of life before Full House.” Most of my childhood memories have to do with either working on the show or being on the show or being really connected to that world. I was on the show from five to 13; those are like your childhood years. That was it. So I never had a normal school experience. It was always going to work and going to school, and it’s crazy to think that ever since I can remember that’s how it’s been.

How is it different working as an adult with Bob Saget, John Stamos and Dave Coulier on Fuller House?

I feel like I’m a part of the adults now. It’s like the secrets are out, we’re sharing jokes, I don’t have to go run off to school. It just feels like when you move from the kid’s table to the adult’s table at Thanksgiving. It’s sort of that same transition where you’re like, “Oh, OK! I’m in the big kid’s club now.”

Did you learn about anything crazy that happened on set of the original show that you were shielded from as a kid?

Not that I can remember. Those guys were actually pretty good on set. I’ve heard stories about them having fun outside of work—there are definitely some Vegas stories that they’ve shared—but nothing too crazy while they were on set with us kids. I mean, they always had their inappropriate humor and stuff like that.

Well, we are talking about Bob Saget.

Is there anything you can spill about the new season? DJ and even Kimmy Gibbler had romantic relationships in the first season, but Stephanie really didn’t.

Yeah, Steph gets a boyfriend this season. She does have a little bit more going on in the romance department. She’s a lot more focused on her music career, and she’s kind of settling into the family dynamic. Part of Steph’s story is that she was traveling the world with her music and living that kind of lifestyle, and she’s now settling a bit more into being grounded. You really see that progression for her throughout this season. She has more of a role as an aunt and is definitely a bit happier being with the family.

Last season you had Macy Gray and Giants’ outfielder Hunter Pence as guest stars. Any fun ones this time?

New Kids on the Block. Candace [Cameron Bure] and Andrea [Barber] were like beside themselves, because they were huge fans growing up. We also bring back a lot of the cast from the original show, like Gia, who was Stephanie’s troublemaking friend. And then DJ and Kimmy have their high school reunion, where we see a lot of the characters that DJ went to high school with coming back. It’s fun references for fans who grew up watching the show, like, “Oh my god. it’s Kathy Santoni!”

Any Mary-Kate and Ashley Olsen cameos?

Do you have reunions with folks from the other TGIF shows? Like do you, Urkel, Balki and Topanga ever hang out?

I actually have another show coming out with Christine Lakin, who was on Step by Step, and Beverley Mitchell, who was on 7th Heaven, called Hollywood Darlings. It’s a fun comedy about things that have really happened in our lives, but turned up to 11. Like, we play really heightened versions of ourselves. We have a lot of great guest stars on that show too using TGIF people, but it’s adult humor. It’s definitely not the show that you’re gonna sit and watch with your kids. It’s a little bit darker humor, and I think the kids who grew up watching Full House who are now my age will find it funny.

Yes, he’s been talking about it for a while. He bought the actual Full House house, so now it’s a real part of the family.

Does the inside look like the set? Not yet, but he’s working on getting it there. The inside of the house that we have on set, there’s no way that could physically exist as the house you see on the outside. But he is trying to go in and make it as close to what the set looks like. I’m sure the neighbors are gonna fucking hate us.

And fans already take pictures in front of the house now anyway.

The house is on Broderick St., and about 200 people a day come by and take pictures. It’s on a bunch of San Francisco city tours. The owners before Jeff tried to repaint it to make it indistinguishable from the others, but Jeff painted the front door red again so people will know. There’s no hiding the Full House house.

How many times a day do people ask you to say “How rude!”?

It depends on where I’m at. If I’m out somewhere, people will definitely ask. I speak at different colleges and universities about growing up on the show, and that’s always one of the questions: “Can you say, ‘How rude’?” I’ve resigned myself to the fact that it will probably be on my tombstone.

What do you talk about at colleges?

I talk about growing up on Full House, what my life was like after and in between—the good stuff and the bad stuff—and where I am today. It’s a lot about my personal experiences and my memoir. It’s really fun to speak about my life coming full circle.

You mentioned that Full House is a lot of people’s guilty pleasure. What are some of yours?

I binge watch Orange Is the New Black, which is one of my favorites. So good. Stranger Things, Game of Thrones I’m a huge fan of. I’m actually a huge book nerd. I will almost always choose a book over watching TV. I usually like real dark psychological thriller stuff. I’m reading a Stephen King book now that’s fantastic, Doctor Sleep, which is the sequel to The Shining. Stuff that is a little bit scary is more my speed than anything else. Romance novels and rom-coms are not usually my go-tos.

Have you been watching your costar Candace Cameron Bure in those Hallmark Channel Christmas movies?

To be honest, I don’t have cable. I only have Netflix and HBO GO. I’m a total on-demand girl. There’s no sense in paying for TV that I’m not gonna watch.

Finally, what do you look for in a guy?

A sense of humor, for sure. If you don’t have a great sense of humor and are sarcastic and find darker things funny, then it’s not going to work. I grew up with Bob Saget, so my sense of humor is maybe a little bit twisted.