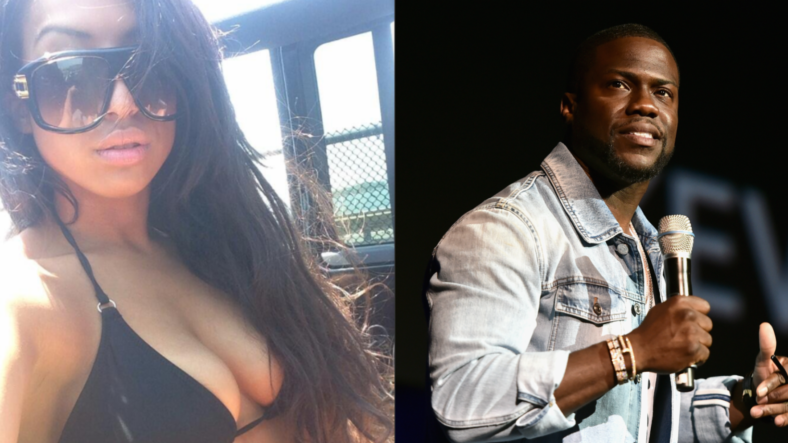 The woman in the sexually suggestive video that’s reportedly being used to extort comedy superstar Kevin Hart has been identified as Montia Sabbag, who apparently works as a “traveling stripper”, reports TMZ.

She’s 27, lives in Long Beach, CA and met Kevin during a pretty wild weekend in Vegas back in August… she’s a stripper who hits up whatever clubs she can book.

TMZ also obtained an exclusive frame from that infamous video that Hart referenced on Instagram over the weekend that appears to show Hart with his hand on Sabbag’s leg.

Innocuous as the image may seem, other segments of the clip are supposedly more damning, reports TMZ.

The first frames of the 4 minute and 47 second video are a pic of Kevin and Montia.

You can’t see who’s on the bed during the most explicit portion of the tape, but after the bed scene 2 people who look like Kevin and Montia are walking around in various stages of undress.

Sabbag denies taking part in the extortion attempt, but authorities are skeptical. Law enforcement will need to decode encrypted emails to unveil the blackmailer’s identity.

After Hart’s attorney’s contacted Sabbag, she immediately sought legal representation of her own and agreed to take a lie detector test—for $420,000.

…Sources say before making a multi-million dollar demand to Kevin in return for keeping the video a secret, the extortionist tried to get at least one media outlet to pay $15 million for the highly produced video.

The stand-up megastar is reportedly using the considerable resources at his disposal to track down anyone involved in the extortion attempt.

Our sources say Kevin had a meeting by telephone Monday afternoon with 2 investigators on the case and it lasted an hour and a half. He aggressively wants to help law enforcement identify and catch the extortionist(s). This was his second meeting with investigators.

Given that he has already publicly apologized to his wife, kids and fans, one would assume that something went down. From the looks of the Instagram pic posted above, it looks like Hart hopes to run off all that drama.

Meanwhile, here’s a better look at the woman named by TMZ in the scandal: