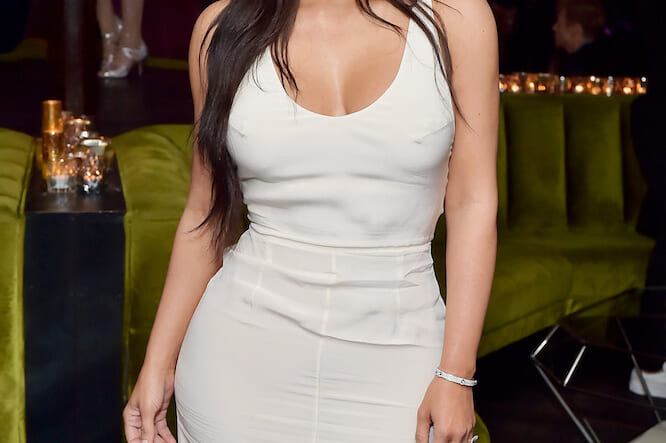 The Kardashian dynasty has a laundry list of photoshop allegations, the most recent directed at Kim.

Kim Kardashian just shared a sexy bikini snap from her vacation in Turks and Caicos, and fans caught sight of some oddities.

There was a white speck above her right hand, which Page Six claims ” indicates the liquify tool has been used,” her left arm was distorted, and her right hip appeared to be larger than the other.

Her haters called it a “photoshop fail,” but whether or not she tried to manipulate her curves and got caught, her most recent blunder falls into a long tradition of celebrity photoshop fails. Above, 15 of the most egregious examples.

A rep for Kim has spoken out, telling Page Six that the “image in question with the white mark is actually filtered through an app that adds in imperfections to the image. She has used it for several other photos seen on her Instagram where you can see cracked lines and white spots.”

Oh sure, blame it on the filter!

Kim K had just recently shut down accusations she suffered a “photoshop fail” after she posted a photo with a warped car in the background. It was really just an intentional photo effect.

“I’m seeing online and on news media outlets that I suffered a ‘Photoshop fail,'” she wrote on her website. “So ridiculous! I reposted a picture on Instagram that a fan had already posted — I only added a filter to it… It looks like the fan mirrored the photo, which is the reason the car looks like that.”

Even if you got off the hook that time, Kim, you did not escape our list!