Mia Khalifa Roasted Cowboys Nation, Then Was Hilariously Trolled By Fans of Every Other NFL Team

“I’d rather date a vegan than a Cowboys fan.” 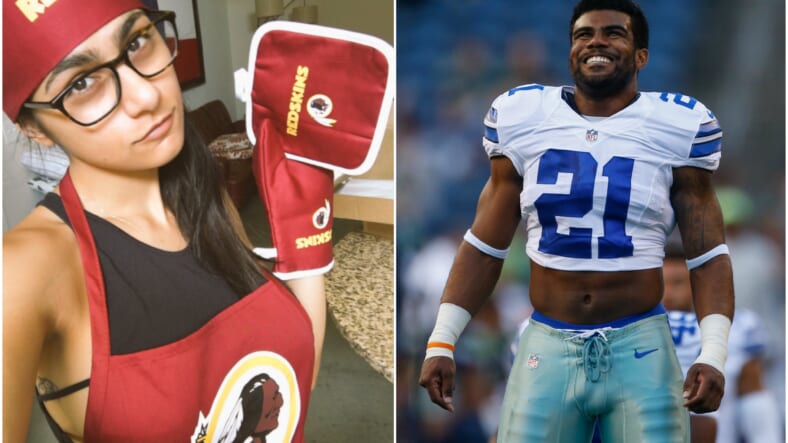 The Dallas Cowboys had an outstanding 13-3 season in 2016, but that wasn’t enough to make Mia Khalifa a fan of the franchise.

I'd rather date a vegan than a Cowboys fan

“Representatives” of other NFL teams took the opportunity to fire back using the format of the famed “Racial Draft” skit from Chappelle’s Show.

As a representative of both vegan and cowboys nation, we humbly pass her on to the carnivores

As a representative of the Eagles we kindly deny your offer even though she got some big tits. We pass her onto redskin fans.

As a former resident of Baltimore, we also deny and will pass her on to the Patriots

As a representative of the patriots we kindly pass on this offer. But would like to pass her off to the Detroit Lions, they need something

As a representative of Lions fans, we respectfully decline and pass her off to the Cleveland Browns, who still need a quarterback

Given that Khalifa is a devoted follower of the Redskins, being rejected by their fan base probably stung a little. But given her penchant for outspoken sports commentary, she’s surely endured harsher criticism.

@upinthecutjones Redskins but mostly a fan of players. Whoever is on my fantasy team.

Even if these guys don’t want to claim her as member of their respective NFL fan bases, we doubt they’ll actually unfollow her on Twitter or Instagram as her posts are still fire. Here’s a sampling: