“Seven girls, one at a time with Hef.” 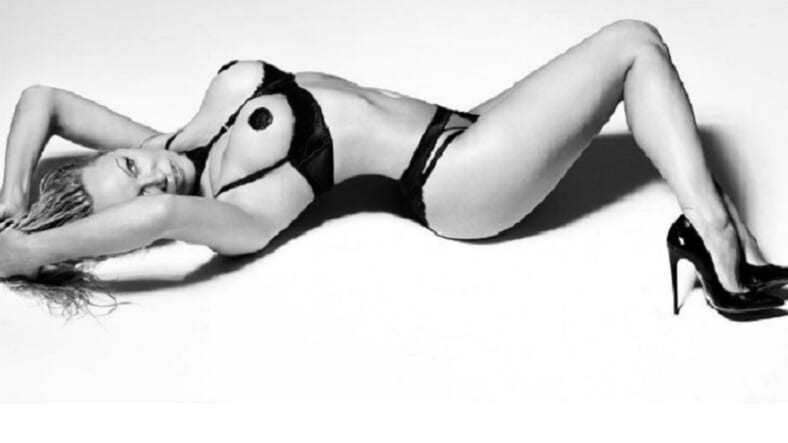 You wouldn’t know it, but Pamela Anderson is 50. And fifty years is long enough to have done some serious living. As she detailed in an interview for Piers Morgan’s Life Stories, she has been through a lot, including come-ons from action stars, flirtations with world leaders, and dates with the King of Pop.

While imagining Anderson on a date with the King—Michael Jackson—is strange, the most surprising detail from her interview is discovering who she says was her longtime, fatherly defender: Hugh Hefner.

This is the same Playboy founder who held parties where—according to Anderson—many guests were “naked in the grotto. And the girls were ­downstairs and they all went upstairs.”

The Sun got an early look at the interview, in which Anderson made it clear she was curious about such a situation and followed, thinking, “‘What could be going on up here?’”

What she saw wasn’t too surprising, given later revelations about Hef’s practices: “Seven girls, one at a time with Hef. I stood at the end of the bed watching them and then I realized they were watching me. I thought, ‘This is not a movie. I need to leave.'”

Other “craziness” Anderson saw at Hef’s castle o’ lust included “big TV screens with crazy things going on with him and the girls and baby oil.” Yet Hefner, she said, was a “true gentleman and he was charming. He loved women and he empowered women. He was very forward-thinking and created his own life. Nobody could copy him. It was nothing salacious. I thought it was very innocent.”

A post shared by The Pamela Anderson Foundation (@pamelaanderson) on Mar 1, 2018 at 2:50am PST

If Hugh Hefner was fatherly with the former Baywatch star, she received the kind of attention you might expect from others. Anderson told Morgan that Sylvester Stallone “offered me a condo and a Porsche to be his ‘number one girl,'” but she wasn’t interested.

Stallone was just one powerful man to pay her such close attention. She said Russian president Vladimir Putin wanted her “to come to his inauguration and give him flowers,” but she declined. Still, she tap-danced around questions regarding any relationship with the world leader, simply saying “had a great relationship with Russia.”

Anderson also revealed she sometimes saw the late Michael Jackson. She’d always been a fan of the singer and told Morgan they “went out but not on dates.”

Jackson “was such an amazing soul,” she said, “and was very ­complimentary. He was flattering.”

Of course Morgan had to ask her about her relationship with Wikileaks founder Julian Assange. Anderson has always been careful regarding such questions, and she shut Morgan down, saying “No . . . I don’t want to talk about that. You are so persistent. I am too honest.”

From The Sun‘s account of the interview, it’s Anderson’s account of Hugh Hefner’s kindness that stands out, in the end.

“I have had men say, ‘Come back to my hotel room and audition with me,” Anderson told Morgan, “… People have said, ‘Pamela, come and join us in the Jacuzzi and I will give you $100,000.’ And I have said, ‘I think that is more than just the Jacuzzi. I am calling Hef.'”

The Playboy founder—the man famous for his silk pajamas and sexual appetite—acting as Pamela Anderson’s knight in shining armor.

That’s crazy enough to be true.