The former Slovenian supermodel could write a new chapter in the history of presidential spouses. 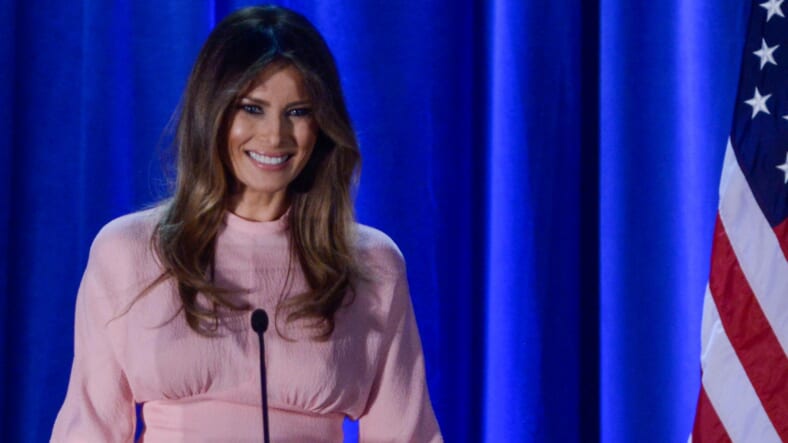 When she was a young girl growing in communist Slovenia, it’s unlikely that the next First Lady of the United States had any idea how far she would go. Because who could have predicted her journey from a design student in Ljubljana to supermodel, to successful businesswoman, to presiding over social life in the White House?

Then again, a closer look at Melania Trump, wife of president-elect Donald Trump, makes it clear her rise wasn’t improbable at all. It was self-evident even to those who opposed her husband that she was graced with beauty and charisma—but many may not realize that she is perhaps one of the most uniquely gifted women to ever rise to her position.

Here are seven reasons why Melania Trump is likely to be a truly consequential, historic First Lady and an ideal ambassador to the world at large.

Additionally, prior to marrying Donald Trump in 2005, she traveled the world as a top model, adorning the pages of European editions of Vanity Fair, among others. She has more range than most presidential wives of yesteryear.

2. Melania Trump clearly respects the history of the role of First Lady.

Years before she married Donald Trump, Melania said in an interview with the New York Times that if she one day became First Lady, she would “be very traditional. Like Betty Ford or Jackie Kennedy.” Ford’s name became synonymous with the positive cause of addiction recovery support, and Jackie Kennedy was a style and beauty icon. Melania knew even then how vital the First Lady’s role is to society and just how historic it can be.

3. She’s a devoted mother to a school-age child.

One of the vital qualities people want to see in a First Lady is empathy. Even for those who might not think a one-time supermodel might understand what their life is like, motherhood may present common ground. And Melania Trump is devoted to her son with Donald, 10-year-old Barron Trump. Even in a household where the parents could easily afford all the paid childcare in the world, she frequently elected to forego the campaign trail in order to be with her son. Parents of all political persuasions can respect that. She is leading in an exemplary fashion.

4. She has already made history.

Only one other First Lady has ever been foreign-born, President John Quincy Adams’s British wife Louisa. This makes Melania Trump the first woman from another country to join her head-of-state husband in the White House in nearly 200 years. This, like her language skills, will provide First Lady Melania Trump with a truly unique perspective and enhance the goodwill ambassador-like nature of the First Lady’s role when visiting other nations.

5. As the wife to a billionaire with interests around the world, she already understands the massive scope of her role.

Donald Trump is the first real-estate operator and entrepreneur with no previous political position to ascend to the presidency. However he was handily prepared in a number of respects by running the far-reaching Trump business empire. For 11 years, Melania has been at his side as he traveled the world making deals, in addition to carving a niche as an entrepreneur in her own right.

6. She has run her own businesses and been deeply involved in charity work.

Some First Ladies have been homemakers, others have been professional women, but Melania Trump will perhaps be the first to have had business interests in addition to charitable and philanthropic outreach. She had her own line of jewelry for sale on QVC and in an interview with Parenting magazine about that, she made it clear that she understood her husband’s devotion to his own work. “He breathes business,” she said, “I love that about him, I love that. Doesn’t bother me. I am very independent.” She has reportedly said she will absolutely continue her charity work and maintain her philanthropy as First Lady.

7. Melania Trump will be a truly modern First Lady tackling the 21st Century problem of cyberbullying.

In a speech in Philadelphia prior to her husband’s election on November 9, Mrs. Trump made it clear that one of her signal interests as First Lady would be an issue unique to 2016: cyberbullying. “Our culture has gotten too mean and too rough,” she said, “especially to children and teenagers.” She said it is wrong “when a 12-year-old girl or boy is mocked, bullied or attacked. It is terrible when that happens on the playground and it is absolutely unacceptable when it’s done by someone with no name hiding on the internet.” With unmistakable sincerity, Mrs. Trump noted that “Social media is a centerpiece of our lives,” and “like anything that is powerful, it can have a bad side.”

Past First Ladies have had substantial impacts on society—on issues like education, substance abuse, and nutrition. Melania Trump will leave her own unforgettable stamp on the American Experience. This may be the perfect time for her. We are proud to have her as our soon-to-be First Lady.