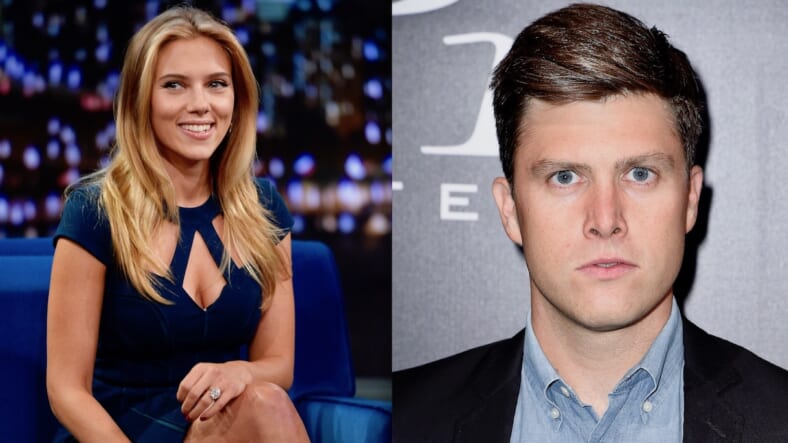 In the wake of her recent divorce, Scarlett Johansson revealed to Playboy that she’s not 100% on board with the whole monogamy thing. Following the announcement, we anticipated a few headlines of a newly single ScarJo bulldozing her way through the dating scene.

The first notch off her belt is Saturday Night Live‘s Colin Jost. After reprising her Ivanka Trump impression on SNL‘s 42nd season finale, she turned her efforts to the Weekend Update co-host at the afterparty, which took place at the Rockefeller Center ice rink.

Page Six has the scoop.

A witness told Page Six, “Scarlett and Colin were making out at the bar at the SNL season finale party at 30 Rock . . . They would make out a bit, then go back to talking,” says the source. “They were at the bar in front of everyone . . . they made out at least twice . . . Then they went back to talking and hanging with other people.”

Another source confirmed, “Scarlett and Colin were flirting and canoodling in full view of everyone at the afterparty, including the SNL cast and crew. They were laughing and seemed to really hit it off.”

Hope nobody tells SNL player Leslie Jones, who has proudly made her desire to “have sexuals” with the “delectable caucasian” known.