“I’m not gonna let people make me change the way I look. If people don’t like it, then don’t look.” 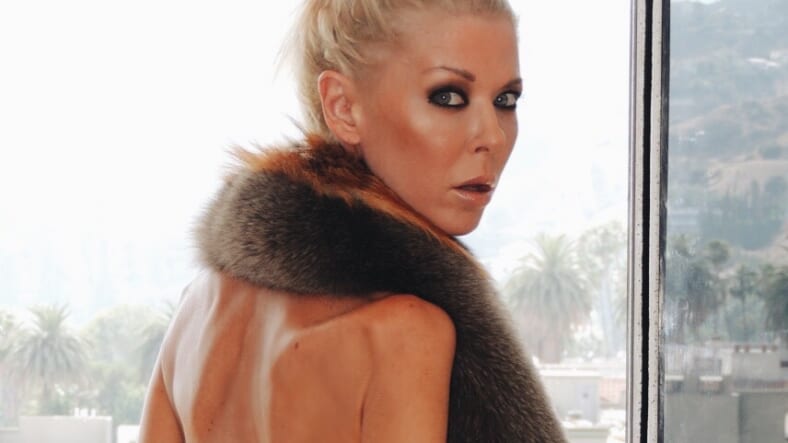 Like a wind-spun shark hurled from the depths of the sea, Tara Reid has caught some serious momentum lately. Her role as April Wexler in the Sharknado franchise—an improbable hit that’s tapped into some insatiable, zeitgeisty appetite for flying sharks and preposterous ways of killing them (chainsaws, satellite laser beams, stiletto heels)—has officially replaced American Pie as the 42-year-old’s most well-known IMDB credit.

In Sharknado 5: Global Swarming, Reid once again plays the suburban mom turned bionic mutant who hoists cars over her head and fights rabid sharks with a lightsaber-chainsaw-hand. Except this time, she can fly.

April may be a ludicrously conceived superhero, but her enduring appeal—she was almost killed off the franchise, before fans voted her back on—has likely helped phase out some of Reid’s less triumphant Tara-ssociations, like the drunken tumbles, botched surgeries, or that time she accidentally freed the nipple.

These days, the New Jersey native is keeping extracurriculars to a minimum (“There’s no love life,” she insists), and has seven movies coming out, including Party Bus to Hell, a horror flick about a Burning Man trip gone wrong. And no, the once-professional party girl didn’t hit the trippy desert fest as “research”: “I’ve always wanted to go, but every year I’m working,” she says. “I guess that’s a good thing.”

You recently Instagrammed your Maxim cover from 2002, calling it “iconic.” Thanks for the love!

I love Maxim. Girls like it! It’s lots of pretty people…a little inspiration.

And you dutifully showed up to last year’s Maxim Halloween party dressed as…a pixie? A fairy?

A greek goddess. It’s always fun to go to Maxim parties. After being on the cover twice—or three times, I don’t even know—it’s been a part of my career for so long. And I always love a good party.

So, let’s talk Sharknado. Who knew that a movie about tornado-propelled shark attacks would be a global success?

Trust me, no one knew. For sure, not once did we ever think it would be a cult phenomenon. It’s amazing to be a part of cult hits—three of them: first The Big Lebowski, then American Pie, now Sharknado. There’s people, movie stars, that have done whatever, but never been in a cult film before. Like, it changes everything.

Were you shocked when the first Sharknado basically hijacked social media when it aired in 2013?

I felt like I was being punked. I didn’t even know it was coming out that weekend. I was on vacation in Mexico and my phone was blowing up. I thought something really bad happened, I got really scared. And they’re like, “Can you believe what happened?” I’m like, What? They’re like, “Sharknado!” We’d done no press on it, nothing—and it was everywhere on Twitter, like 5,000 tweets a minute. I couldn’t believe it.

Your character, April, is mostly a robot at this point—she has a control panel for a torso and a chainsaw for a hand. Sort of Darth Vader-esque.

She’s become a superhero. To play every actor’s dream, to play a superhero, is so much fun.

We’ve seen some truly ludicrous things in these movies, from killing sharks with a baseball bat on the New York subway to sucking up a shark by its tail with a vacuum cleaner inside the White House. What do you think has been the actual craziest plot point?

When my character gives birth inside a shark in outer space.

Wait, my brain hurts. She gets eaten by a shark that’s circling outer space, and then delivers her own baby while still inside?

Yeah. The shark is in outer space and she’s giving birth and then it lands on the ground [and she and her baby emerge with the help of a chainsaw]. It’s like Peter Pan inside the whale.

You’ve done these movies for five years straight. Are you a little weary of sharks by now?

I mean, I’ve never heard so much about sharks in my life. I feel like I see a shark everywhere I go. Every time I look somewhere, it’s about sharks; it was just Shark Week; when I do pictures or interviews, there’s sharks in it. Like, I swear. How many times, even today, did the word shark come up? Maybe like a thousand already.

The word has lost all meaning?

Strange as it sounds, you seem to consistently get asked whether there are real sharks in the movie.

I think that question is crazy. Everyone knows there are not sharks in the movie. Look at the quality [of the animation]. When someone asks me that, I’m not even sure if they’re serious.

Speaking of not-sure-you’re-serious, is it true you once said a real sharknado was possible?

Okay—obviously a sharknado can’t really happen. But technically, in a science way, if a tornado did go over the sea, it could suck up a shark and do it. Would it ever happen? No. It’s like saying pigs would fly. You know what I’m saying?

There’s a lot of recent buzz about the fact that Donald Trump almost played the president in Sharknado 3, but turned it down to run for the actual presidency. Can you imagine him in the role—which ultimately went to Mark Cuban—fighting sharknados and impaling a shark with an American flag?

Who knows, you know what I mean? You never know what anyone’s gonna do. He got the offer, but then his schedule didn’t work. If it was meant for him to do, he would have done it.

You’ve had your signature long blonde hair for decades now. Ever thought of making a radical change?

I was brunette once for a movie and didn’t feel the same. Gotta be honest. People don’t give you as much attention. It’s totally different. I love being blonde, I can’t lie.

People definitely pay attention to how you look, maybe too much. Do you get sick of all the commentary about your body?

I just think people should stop body shaming each other. It’s at a point where it’s really hurtful to so many people and to young girls. It’s a form of bullying and the bullying needs to stop. I’m all good with how I look. It’s other people that say things and have all these opinions. My opinion? I’m happy. I’m all good with the way I am.

You recently Instagrammed a photo of yourself in a see-through chain-mail dress, with the caption, “Just so everyone is aware, I was wearing double cutlets.” Did you feel like you had to pre-emptively fend off criticism about your undergarment situation?

I mean, I shouldn’t have to, but people love to pick on me and my body—for years now. Anyone else could wear that dress, and no one says anything. If it was Rihanna, if it was this person, that person, Kim Kardashian, like, it’s fine. If I do something, all of a sudden it’s a sin. It’s always been like that. It’s a double standard. And I’ll still do what I want because I don’t care. I’m not gonna let people make me change the way I look. If people don’t like it, then don’t look.

You used to be a renowned partier, but you recently said, “This Tara can’t hang out with old Tara, she will kick my ass.” Does that mean your partying days are over?

You can’t do what you used to be able to do, you know what I mean? I would never be able to keep up with the younger me. No way. I have aches. My back hurts now. I’m like an old lady.

You appeared in three American Pie movies. In the original, you played conflicted, virginal girlfriend Vicky. In the second, when you come home from college Jason Biggs’ character famously announces, “Vicky got hot!” When you first read that, did you think, What the hell—I was already hot?!

I didn’t care. I thought it was funny; it would be worse if they said, “She got ugly!” Yeah, you can’t be mad at that.

Your old pal and castmate Natasha Lyonne plays an inmate on Orange is the New Black. If you were to reunite with her and join the cast, what sort of criminal would you want to play?

You once mistakenly announced there would be a Big Lebowski sequel, and followed that up with a hilarious spoof where you played all the movie’s main roles in a hypothetical Big Lebowski 2 trailer. If there ever were to be an actual sequel, what do you think Bunny would be up to?

She’d probaby still be in the house, and she’d have all the money because her husband would be dead—well, in real life he’s also dead, but in the movie he would have probably been dead because he’s so much older—and I think she’d be having these big parties and having fun all the time. It would be like the Playboy Mansion.

She’d be running the show in a neon bikini?