We sat through all the previews so you don’t have to. 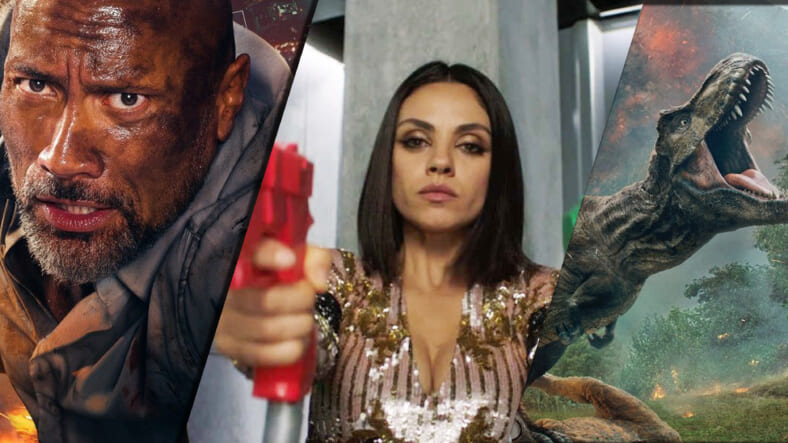 We understand if you already have summer movie fever; it’s been a huge year for Hollywood, even though it’s still chilly in most parts of the country.

Yes, Black Panther, Ready Player One and Avengers: Infinity War have made 2018 one for the record books, but there are still a ton of great flicks coming out between Memorial and Labor Day that should ensure this is one blockbuster summer.

We’re trusting Ron Howard to give us a Han Solo backstory that’ll be as epic as the character himself. Early rumblings made us skeptical, but we still have unreasonably high hopes for this Star Wars story… even if most of that hinges on the awesome Donald Glover as a young Lando. (May 25th)

Few people can pull off the perfect lowbrow comedy combo of dirty jokes and physical gags like Johnny Knoxville, so letting him loose on a movie where he pulls out all the stops to help his failing amusement park survive seems like a perfect way to get things rolling right as summer camp season begins. (June 1st)

Remember that hotel in John Wick? Yeah you do. Now imagine an entire movie set in it. Hotel Artemis is rocking one hell of a cast around a premise that guarantees gunplay and doublecross, all while borrowing some of Wick’s grit. (June 8th)

Somehow based on a true story of a group of friends who kept a game of tag going for 30 years, the cast on this one looks to make Tag a flick that’ll undoubtedly make its way into pop culture. If your friends start slapping you and telling you you’re “it” after this one, we wouldn’t be at all surprised. (June 15th)

Chris Pratt returns to an island full of dinosaurs and things go horribly wrong. Again. More Jurassic probably isn’t all that unpredictable, but we’ll still watch it for awesome scenes of vicious dinosaurs… and to watch Jeff Goldblum explain how life finds a way. (June 22nd)

6. Sicario: Day of the Soldado

Continuing the tale of violence on the border, Day of the Soldado ups the ante to all out war with the cartels. Josh Brolin and Benicio Del Toro are bringing an even darker strategy to a franchise that still haunts us. (June 29th)

The final addition to the MCU in 2018 is taking a smaller form but Ant Man’s sequel, where he gets a sidekick in Evangeline Lily’s The Wasp, is sure to have profound implications on where we left all of our Marvel heroes at the end of Infinity War. In the very least, Ant Man and the Wasp will introduce the Quantum Realm, an important concept for what’s still to come for both Captain Marvel and The Avengers. (July 6th)

Taking it back to the beginning, this prequel throws down the origin story of the purge, tossing in some serious political overtones and the jump scare violence you’ve come to expect of The Purse franchise. (July 6th)

Woefully without giant, mutated animals or an array of enviable cars, Skyscraper does manage to have Dwayne Johnson jumping off of exploding things and, really, what more do you need in a summer blockbuster? (July 13th)

Ethan Hunt’s return has us giddy as Cruise and company are back for another chapter in the MI franchise. Playing on a character that’s been pushed to the brink far too many times, we’ll always make sure to catch what’s new for the IMF. (July 27th)

We’re holding out hope that The Spy Who Dumped Me is this summer’s Bridesmaids and, with Mila Kunis and Kate McKinnon starring, we think there’s a good chance it is. In the very least, it’ll be a date movie that most men wouldn’t mind seeing. (August 3rd)

Jason Statham is taking a crack at the Sharknado genre, and we’re all for it. Expect The Meg (short for Megalodon) to toss out all reality in favor of an over-the-top romp through treacherous seas. (August 10th)

Few things make us happier than watching puppets get R-rated, and this gem that was originally set for release in 2013 makes us positively ecstatic. The technique worked in Team America, it worked in Avenue Q and, by god, it’s going to work in The Happytime Murders, a flick that looks half-baked and hard-boiled enough to be a high point of 2018’s summer lineup. (August 17th)

What looks like a movie that’s borrowing some plot from Westworld, Keanu Reeves takes on the role of a scientist who’s so disturbed by the loss of his family that he seeks to bring them back, no matter what the means or the consequences. (August 24th)

Gangland goes sci-fi in this story of the little guy fighting back, with the help of some alien weapons. We suspect Kin won’t be quite as friendly as the trailer makes it seem. (August 31st)