20 Movies You Won’t Believe Are Turning 20 This Year, Ranked 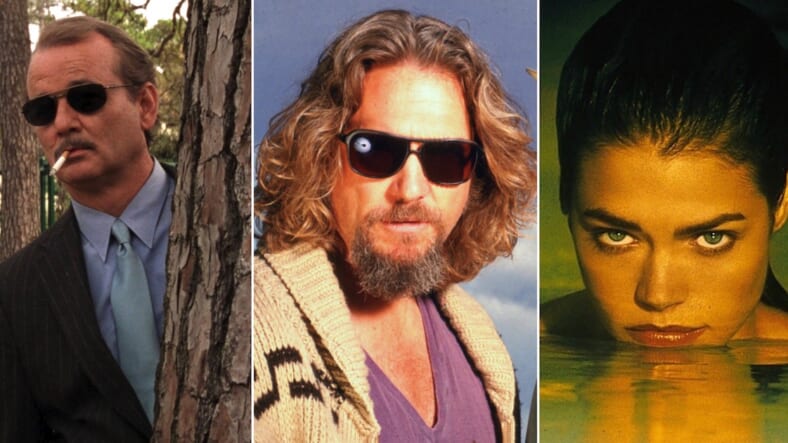 Looking back, 1998 was a hell of a year for movies, both highbrow and low. From Oscar bait like Saving Private Ryan and American History X to guilty pleasures like Rush Hour and Wild Things to cult classics like The Big Lebowski and Blade, the decade’s penultimate year had it all.

Apparently, it was also a really long time ago, considering these flicks are now two decades old. We ordered up our favorites to share with you based on how well they hold up today.

Please note: Shakespeare in Love is definitely not on this list.

Elijah Wood, Usher, Jordana Brewster and Josh Hartnett fight against a school overrun by possessed teachers. Yes, this is a real movie and yes, it’s goddamn amazing. The action horror flick gets far too little love nowadays, so we needed you to know about it. You need to watch it, if only to see a 20-years-younger Jon Stewart get his head taken off by the business end of a Swingline paper guillotine.

As American culture continues to wrestle with letting go of its less-than-progressive past, Pleasantville might be more poignant now than it was in ‘98. It’s still a great movie with a great cast, and its black-and-white/color gimmick still makes for a gorgeous piece of cinema.

18. Fear and Loathing in Las Vegas

Hunter S. Thompson might be gone, but his gonzo romp through Sin City, hilariously deadpanned by an equally weird (at the time) Johnny Depp, remains. We’re not sure if this is a classic or cult classic, but Thompson’s unique and poetic take on a bender is a spectacle that shouldn’t be missed.

Telling the story of a handful of teenagers’ high school experience on the final night of high school, Can’t Hardly Wait now acts as a reminder of what high school used to be like in the ’90s, sort of the way Dazed and Confused serves as a reminder for the prior generation. Romantic, nostalgic and funny, with a great cast of recognizable faces and some absolutely memorable moments, this one hits hard for anyone who watched it back then and still holds up for fresh eyes today.

Sandwiched between the Cheech and Chong and Seth Rogen eras, Dave Chappelle snuck in one of the ultimate stoner movies of all time. Chappelle’s own comic genius is on display in full here, utterly nailing everything from his delivery to his own brand of physical comedy. Half Baked turned Chappelle into an icon and remains a go-to 420 watch.

We love to remember Wild Things for one particular scene (wink nudge), but it’s easy to forget that it’s also a completely entertaining tale of murder, sex and doublecross. Boasting some of the hottest stars of the era and the extra oomph of a Bill Murray cameo, Wild Things is still a great flick today.

Jackie Chan and Chris Tucker’s first oddball team up was fresh in a way we couldn’t imagine today, but still delivers big laughs and great action thanks to Tucker’s big mouth and Chan’s legendary stunt work and martial arts skills.

13. What Dreams May Come

In 1998, it was easy to write this movie off as simply a visual masterpiece. Now that Robin Williams is gone, this stunning, heartbreaking exploration of death and an afterlife that’s as often heaven as it is hell seems to have taken on entirely new relevance.

The movie that clued us in on just how slick George Clooney was—and also convinced us the Jennifer Lopez could act—Out of Sight was the heist movie to watch before Ocean’s 11 stole its crown. Funny and cool from start to finish, it’s a raw Soderbergh gem that’s overshadowed by his bigger Ocean’s franchise or bigger budget offerings like Logan Lucky.

Anyone denying that Blade laid the bedrock of the MCU needs to brush up on their comic history. Wesley Snipes’ daywalker was proof that audiences could get behind comic book characters on the silver screen as much as they could on paper. Even if Blade has been callously omitted from Marvel’s future cinematic plans, we’re not willing to toss aside this badass vampire hunter or that thumping techno soundtrack.

The guy’s from South Park know how to do social commentary, and their take on commercialization in sports took the form of a 90 minute string of gags that might also make you gag. BASEketball may not be as hyper-current as the latest episode of South Park, but Matt Stone and Trey Parker’s portrayal of lovable losers will still have you rooting for them when you’re not crying from laughing.

Before Guy Ritchie unleashed his finely honed gangster Brit style on the world in Snatch, he snuck a more raw version of it into the mainstream with Lock, Stock. A romp through the English underworld, filled with inept wannabes, ultra-violence and snappy-as-fuck dialogue, this one is worth a watch for Jason Statham’s breakout role as much as it is for its twisting plots.

8. There’s Something About Mary

The Farrelly Brothers in top form, Ben Stiller mastering gross-out humor and Cameron Diaz carving out a permanent place in hearts everywhere, Mary was a movie that was so good we watched it until we hated it. Turns out a twenty year break can renew even the most played out movie, and Mary still kills on a rewatch.

Robert De Niro, Sean Bean and Jean Reno star in this gritty action flick that evolved the genre past the enormous body counts of the early 90s and laid the groundwork for more modern movies in the category like Bourne and Daniel Craig’s James Bond. If that’s not enough for you, at least watch it for its superb car chase through Paris.

Our first taste of Wes Anderson’s inimitable style—we had to circle back for the even more indie Bottle Rocket—was weird but far from unenjoyable as Bill Murray and Jason Schwartzman wage war for the heart of a woman, surrounded by carefully choreographed backdrops and to the beat of a killer soundtrack.

Arguably Jim Carrey’s finest performance, the story of a man born on camera and watched ever since is another movie on this list that may be more poignant today than when it debuted. It’s certainly more prophetic in retrospect. Truman’s own story might be one of hope and enjoyable for that alone, but it’s The Truman Show’s commentary on our world that keeps it as relevant as ever in 2018.

A shockingly up-close look at Neo-Nazism, American History X is a hard-to-watch, must-watch movie that earned Ed Norton an Oscar nomination. Disturbing and visceral in its scenes, it’s damn near a American citizen’s duty to take this one in with both eyes open.

Bruce Willis and Ben Affleck go full space cowboy in this mother of all disaster movies. The dialogue is snappy, the action is tense, and the cast is rounded out by lovable misfits through and through, including a lunatic Steve Buscemi and a Jethro Tull-loving Owen Wilson. The biggest summer blockbuster of 1998 is now one of those movies that you have to finish watching no matter where you catch it on TV.

Unquestioningly one of the finest war films of all time and a jewel of Spielberg’s life’s work, Saving Private Ryan was as enormous a technical achievement as it was a mesmerizing story of valor. Also, Tom Hanks is a goddamn national treasure.

The Coen Brothers’ unique style of filmmaking hit mainstream paydirt when Fargo became an Oscar darling in 1997, but they solidified themselves as cult icons with Lebowski in 1998. The infinitely quotable, supremely weird, darkly funny and sickeningly rewatchable remains that way to this day, even after national Lebowski gatherings, bowling leagues and a career renaissance for Jeff Bridges have elevated this one from cult to legend.