How to Make The Ultimate Corned Beef and Cabbage Irish Nachos 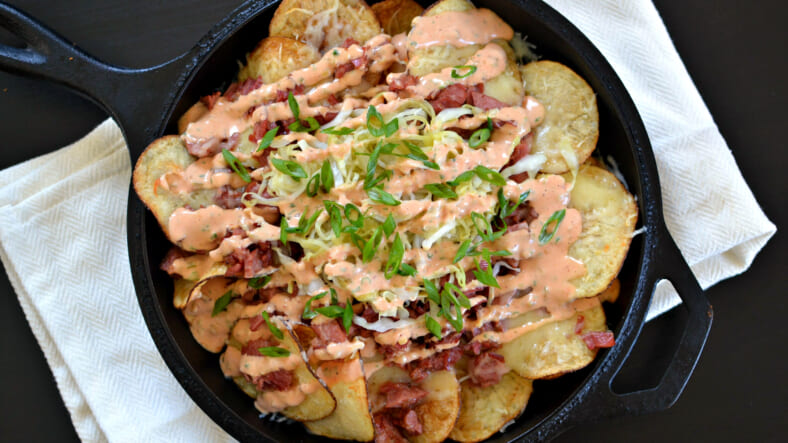 I’ve only spent St. Patrick’s Day one of two ways: sitting at home tending to a slow-simmering pot of corned beef and cabbage, or shithoused at a bar eating nachos and drinking discounted green beer.

Both ways to spend the holiday have their merits, of course. On the one hand, you get to transmit culinary patience and love through a time-honored and historically appropriate dish. On the other hand, you get to have green vomit. Your toilet bowl/sink will look so festive!

So, I figured, why not combine the best of both? With these corned beef and cabbage Irish nachos, you get all the comfort food goodness in an easy-to-drunk-eat package. Recipe for green beer not included, but, like, I think it’s just green and beer.

Take a relatively deep, heavy bottomed pot—I used a cast-iron Dutch oven because cast-iron Dutch ovens are dope and you should invest in one immediately—and heat one tablespoon of vegetable oil on high heat. When the oil starts to smoke, place your corned beef brisket fat side-down in the pan. You want to sear off the brisket to get all those caramelized charred bits at the end. (Seriously, you’re going to want those bits.)

When the brisket is seared on all sides, add in half a sliced onion, the seasoning packet that comes with all corned beef briskets, and 24 ounces of beer. Make it an Irish beer, because let’s be festive about this thing, yeah? It’s a holiday. Put a lid on the corned beef pot and throw it in a 300 degree oven for four hours until it’s stupid tender.

While that magic is happening, shred up a half head of cabbage, and throw it in a big-ass jar with 1 teaspoon sugar, ½ teaspoon salt, and then equal parts water and white vinegar until the jar is filled. Throw that in the fridge until the corned beef is done for some quick-pickled cabbage. Get it? Corned beef. Cabbage. Corned beef and cabbage. Ahhhh, you guys get it.

Now, make some potato chips. You could also just buy potato chips from a store, but fuck that. You’re probably drunk, might as well play with hot oil and a razor sharp mandolin (seriously, don’t do this while drunk, it’s incredibly dangerous). Take a three or four russet potatoes and slice them as thin as you can. You know, like potato chips. Use a mandolin if you have it. If you don’t, get a mandolin.

Take those potato slices and soak them in cold water for at least an hour, changing the water halfway through. This is going to draw the starch out of the potatoes, which will prevent them from burning before getting crispy in the fryer. Drain the potatoes, then dry them well on a paper towel.

Heat one gallon of vegetable or peanut oil in a large stock pot until it reaches 350 degrees. Throw the potato chips in the oil, working in batches to not crowd the pot, and fry for 3 or 4 minutes, or until golden brown and crispy. If they’re not getting crispy enough, toss those bad boys in a 225 degree oven until they are. Don’t accept failure. That’s not what you’re about. Never has been, never will be.

Now, you get to assemble your nachos. And this the part of the process where you can start drinking because there’s minimal danger ahead, provided you can safely melt cheese. Throw a fuckton of potato chips on a heat proof pan of sorts, top them with shredded jack cheese and shredded corned beef, then toss them in a 350 degree oven until the cheese is melty. Add some pickled cabbage, Russian dressing, (when in doubt, make things taste like a Reuben) and scallions, and shove it in your face hole.