Forget what you know about deep dish pizza and just shove this into your mouth-hole. 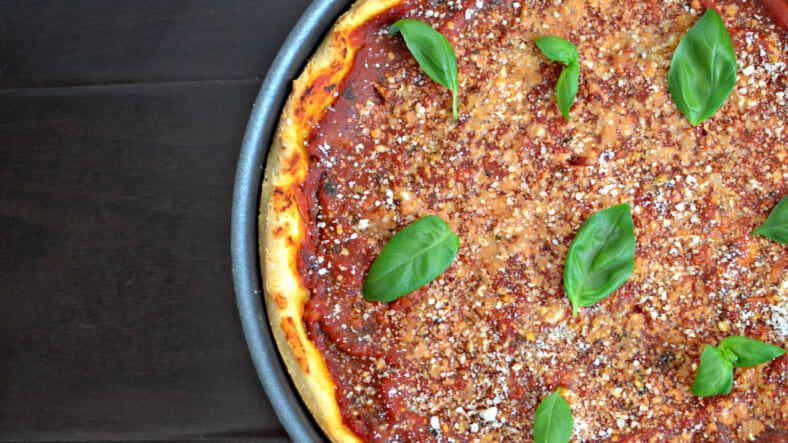 Deep dish pizza is like your favorite tomato pie on steroids. But not the bad kind of steroids that lead to addiction and tear lives apart; it’s like pizza on the amount of performance-enhancing drugs that let someone bang out consistent 50 home run seasons while not getting caught and causing minimal negative long-term health effects.

Not that there’s ever a good amount of steroids one could use, that’d be stupid to say — but, if there were to be such a thing, it should be referred to as a deep dish pizza-level of steroids. It takes all the things you love about pizza — the interplay between sauce, cheese, carbs, and processed meats — and cranks the dial up to 11 to create an eight-pound flavor bomb with the density of a star collapsing into itself. Put the dying star into your mouth-hole. Make this deep dish pizza.

First things first, get that yeast activated. Take one standard packet of active dry yeast, throw it in a large mixing bowl, then add in one cup of warm water. Stir and let it sit for five minutes until it smells vaguely like a shirt that you spilled beer on a week ago and didn’t bother to wash because, like, you didn’t spill that much beer on it. That’s how you know the yeast is working.

Take a deep breath and try to remember this shit: add one tablespoon of sugar, two tablespoons of kosher salt, three cups all purpose flour, ¾ of a cup of yellow cornmeal, and a stick of melted butter. Add in more butter if you feel like it — but that could be said for any recipe and/or recreational activity. Start mixing all those ingredients with your hands because you probably don’t have a stand mixer.

When the dough is all mixed through, knead it for at least five minutes on a well-floured surface. Just mash at it with the heel of your hand a bunch; that’s going to start developing gluten. Despite what Gwyneth says, gluten is a good thing.

Form your dough into a big-ass ball, then throw it in a large bowl that’s been greased up with one tablespoon of olive oil. Coat the dough ball with the olive oil, then cover the bowl and set it in a warm spot for two hours. This is called proofing. They talk about it a bunch on The Great British Bake Off. Seems important.

When Major League II ends — give it a rewatch while your dough is proofing; it holds up — punch all the air holes out of that dough ball, then throw it in a large, round pan lubed up with olive oil. Press the dough all around the pan (I used some sort of deep sautée situation) until it’s pressed into an even ½ inch layer. The dough should come up about two inches around the perimeter of the pan. ‘Cause, you know, it’s deep dish. That’s the point.

Preheat your oven to 425 degrees, then layer as follows: a fuck-ton of shredded mozzarella cheese, a little bit of tomato sauce, a fuck-ton of crumbled Italian sausage, any veggies you want (I rocked some charred broccolini and button mushrooms), then a real fat layer of tomato sauce to finish it off. You want the tomato sauce, and a liberal dusting of parmesan, to be the final layer. If you throw mozzarella on top, that’s going to burn in the oven before anything gets cooked. Then you’ll look like an asshole and all your friends will abandon you.

The pizza should cook in about 20-25 minutes, but all ovens are different, so just be a rational person and pull that thing when it becomes golden brown. Let the pizza rest for at least five minutes — watch some deleted scenes from Major League II in the meantime — then cover that shit in ranch and eat it with your hands like any person with zero sense of shame would.