Bite Club: How to Make Gumbo

We talked to a professional chef for this one. You’re welcome. 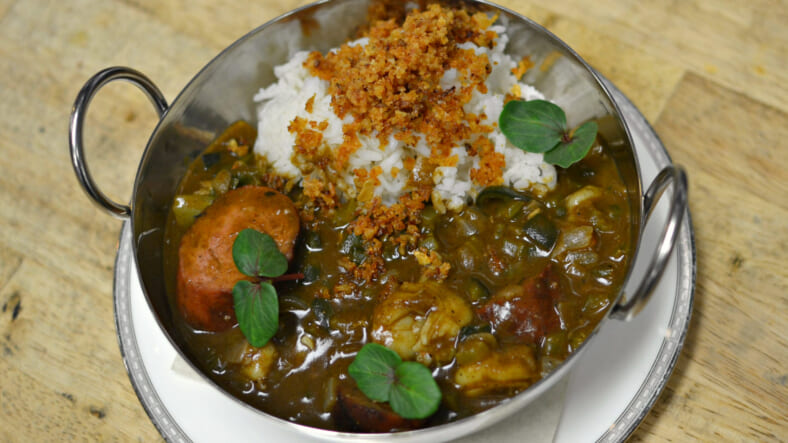 What exactly is a “real man”? Is it the bro-dawg at the gym with the smallest shirt and biggest deadlift? Is it the dude who slaps on Axe body spray and cruises local farmers markets for single moms while suckling a CamelBak full of Hawaiian Punch and grain alcohol? Is it a trio of diminutive space aliens stacked head-to-toe in a trench coat stealing the basketball prowess from five NBA superstars so they can defeat a ragtag team of cartoon characters, plus Michael Jordan?No. No it’s not — though the CamelBak idea does seem useful. A real man is the person who knows when to ask for help. He’s the kind of guy who will fuck up the dark roux for gumbo like 15 times in a row — sometimes it’s scorched; sometimes it’s pale and floury — and realize that he needs to consult someone who actually knows what they’re doing.If you couldn’t tell from context clues and the headline of this article, that perennial fuck-up is me. I enlisted the help of chef Samuel Monsour from L.A.’s NOLA-style restaurant Preux & Proper to teach me how to make gumbo good.

Start off by making that asshole of a dark roux that we used as an extended metaphor for masculinity earlier. Quick primer: a roux is a cooked mixture of flour and fat that’s used as a base and thickener for soups and stews. If you cook the mixture gently, you can use it for white sauces like bechamel and mornay, but for something like gumbo, you need to toast the fuck out of that flour and get it all funky and roasty.

Take ½ cup of flour and stir it into a ¼ pound of melted butter in a large stock pot. Stir it over medium heat for about ten minutes, or until the roux becomes a deep reddish brown color. As soon as the roux hits the desired color — and this is something that gumbo OG Monsour taught me — throw in one diced yellow onion. That’s going to stop the cooking process immediately and ensure you don’t scorch the roux. Boom — knowledge getting dropped.

Sautée the onion for a few minutes, then add in three stalks of finely chopped celery, two diced and seeded poblano peppers, and four cloves of minced garlic. Continue to sautée them in the roux over medium heat for an additional five or six minutes, then hit the pot with four cups of cold chicken stock. Adding the stock in cold will make sure the flour dissolves evenly and the mixture doesn’t start bubbling over. Again — knowledge.

Add in a bay leaf, one tablespoon of Essence of Emeril (who else would you trust with seasoning your gumbo?), and two tablespoons of file powder, aka ground sassafras leaves. That last one acts both as a fragrant flavor bomb and a natural thickener. If you can’t find it though, fuck it, just go ahead without it. But know that both chef Monsour and I are disappointed in you.

Let the mixture simmer for about ten minutes until the veggies are tender and the gumbo is getting close to the desired consistency. Slice up ¾ of a pound of smoked andouille sausage and throw it in the pot, followed by ¾ of a pound of deveined raw scrimps. Those scrimps are going to cook really quickly, so only keep them on the heat for one minute, then shut it down.

When the flame’s off, add in a tablespoon of butter for richness — chefs call this mounting, which I find funny because of sex stuff — and a tablespoon of worcestershire for some funk. Add salt to taste, then stir it more. When in doubt, just stir the pot and act like you know what you’re doing.

Serve that big ol’ pot of knowledge-filled deliciousness over a bowl of rice, and if you want to get fancy like Monsour, you can slap a gold-plated grill of micro okra and fried onions on there.