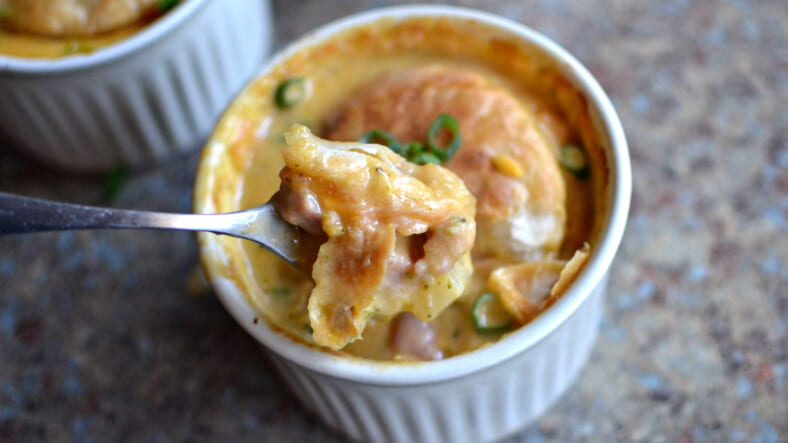 This recipe is alternately titled “How to Prove to Your Girlfriend’s Parents That You’re Resourceful and Do Stuff Good.” That’s because I made this for my girlfriend’s parents to, well, prove to them that I’m resourceful, I do stuff good, and — taking it a step further — apologize for bringing taquitos instead of something more reasonable, like a baked brie, to last year’s Christmas dinner. The taquitos were pretty dope though.

Anyways, when Diane — “Diane” is my immaterial and timeless nom de guerre for girlfriends’ parents — says, “What are we going to do with all this leftover ham?” you better have an easily replicable answer up your sleeve. And that answer should not be taquitos, as we’ve learned in the past. Make pot pies instead — it’s fucking endearing.

Get yourself some leftover Christmas ham. If you don’t celebrate Christmas or you don’t believe in leftovers — both are respectable ways to live your life — then grab a fresh and secular ham steak from the grocery store. Dice up about one pound’s worth of ham and set aside. Get two large leeks, trim off the inedible butthole area at the bottom and spiky hat part at the top, then slice the leek into thin rounds.

Heat up a half stick of butter in a large sauce pot on medium heat, then throw in all the ham and leeks. The ham fat is going to infuse into all those sweet alliums and you want all the pork fat flavor that you can get. When the leeks are cooked down — about 5 minutes in, if you’ve been stirring vigorously — pour in a bottle of beer. I used a pretty neutral white ale, but feel free to fuck around with blondes, pilsners, and maybe even a red ale.

If you have any IPAs in your fridge, pour them in the garbage. That’s a real step in the recipe. It must be followed.

Crank the heat to high and let the beer reduce for 15 minutes. Remove the florets from a small stalk of broccoli, give it a rough chop, and set it aside. Peel two medium sized russet potatoes, and also set those aside. Pour in 16 ounces of chicken stock into the pot, let it all come up to a boil, then dump in your veggies, and continue to boil for an additional 15 minutes. Season it up with a teaspoon of salt and a teaspoon of black pepper too. Might as well.

Dish your ham ‘n’ beer soup into little ramekins — or any other oven safe dish — then roll out some thawed puff pastry or pre-made pie dough. Don’t make your own dough now. It’s not worth it. You’re trying to make yourself seem useful, not be a pretentious try-hard. Cut your pastry into circles, lay it on top of your cheese stew, and bake at 375 for 20 minutes, or until brown and crusty. Eat with a spoon and accept compliments gracefully while still trying to deflect praise because you’re not a fucking Neanderthal.