An entire 4th of July picnic, packed between two buns. 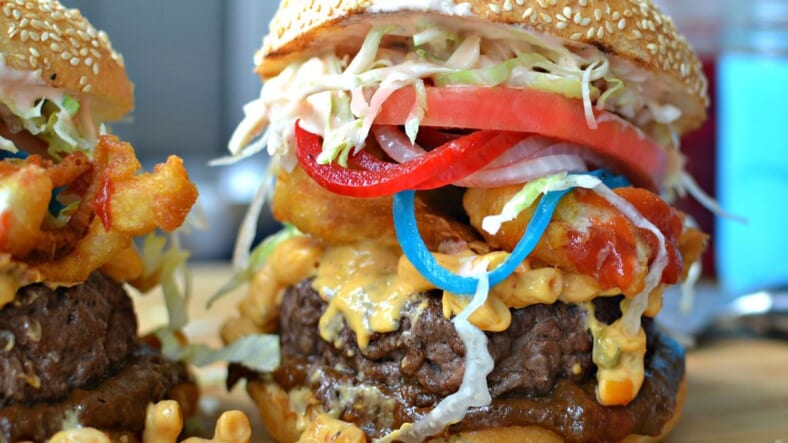 Go out on the lawn, fire up the grill, crack open a beer, blast a little Sammy Hagar (ok, A LOT of Sammy Hagar), roast assorted animal parts over an open flame, tuck them in a bread roll with some Heinz and a square of yellow cheese, eat a pie, then irresponsibly light shit on fire even though you’re a fully grown adult and all the child psychologists assured your parents you’d “grow out of that phase.”

But what if you broke from that time-honored tradition of simple burgers, Hagar, and negligent pyromania to do something truly magnificent (albeit completely grotesque in hindsight)?

Don’t be a lazy motherfucker this 4th of July. Chase greatness. Our forefathers would have wanted it that way.

I sat down with Sammy at his West Hollywood apartment to brainstorm the most quintessentially American burger possible. After a few glasses of Bulleit Bourbon and an entire Mos Def album, we settled on this towering monument of all things land-of-the-free-and-home-of-the-brave: The American Pastime 2.0 aka Uncle Sam’s Meat Sweats.

The recipe for almost all of the components—or similar recipes with minor tweaks—can be found in American Burger Revival(or if you click this link right here). Except for the baked bean hummus, I’m taking credit for that one (and not necessarily in a good way, you just throw a can of beans in the blender).

Even though this monstrosity has an entire 4th of July picnic packed between two buns, none of that matters if the burger itself isn’t cooked properly, and Sammy has a unique method that he swears by: The quad-flip.

I was always taught that flipping a burger more than once was a culinary sin. Everyone told me that the juices would leak out, it would end up dry, I’d lose all my friends, etc. Sammy makes a convincing case otherwise.

He says that by flipping the burger four times, and especially not trying to get cutesy cross-hatch grill marks, you allow a greater surface area for Maillard reactions to take place, creating those deliciously charred bits of caramelized natural sugars without allowing for excess heat penetration. So, rather than getting a gray ring around otherwise medium rare beef, you’re left with an excellent crusty outside and a tastefully bloody inside.

Now’s the part where I’m supposed to tell you that all the flavors melded together and played off each other to balance an otherwise insanely unbalanced creation. They didn’t. It’s hard for liquid cheese, Kool-Aid, molasses, and ranch to really find a common ground.

But, did it taste like America? You bet you freedom-loving ass it did.