Because everything tastes better when it’s deep-fried. 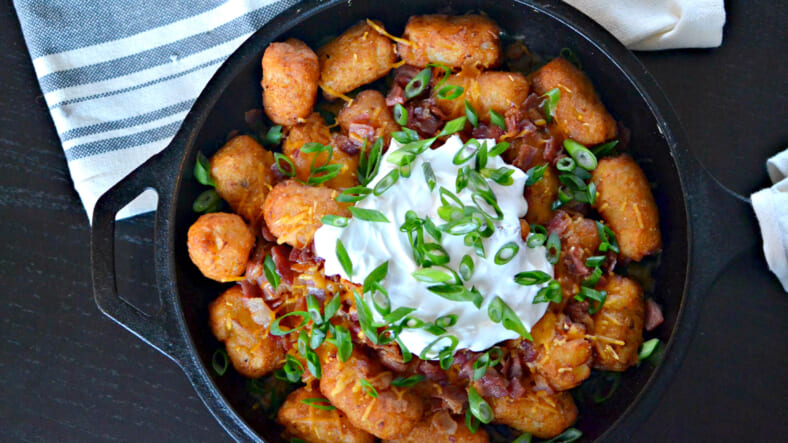 I remember watching a feature on Noma, the restaurant in Copenhagen that was named the world’s best four years in a row, and chef Rene Redzepi was talking about his big-picture food theory. He spoke about finding the optimum flavor points in vegetables and the techniques used to bring them out. When every ingredient is treated properly, through intensive research and development, the perfect dish is created.

For me, that theory is epitomized in tater tots. Dicing potatoes, forming them into tiny dumplings, and frying the shit out of them is the single best way to maximize their flavor and utility. And by drowning them in cheese and bacon and sour cream, you’ve created the perfect dish.

But most tots are relegated to the stuff in the freezer aisle, and they deserve better than that. They deserve the care and attention that Redzepi puts into moss and dirt and bushes and stuff at Noma, and I think he would agree with me here.

Though I’ve made tots tons of times before using my own fat kid food instincts, I recently picked up a copy of The Food Lab by J. Kenji Lopez-Alt, which goes deeper into the science of potato pillows than I ever could. Much of this recipe is adapted from his book, with a few tweaks that probably weren’t necessary. Go on, get — start frying things with reckful abandon.

Peel your potatoes, cut them into 1-inch cubes, then get them soaking in cold water. This will help draw some of the starch out of your potato and ensure that they get crispy without the sugars caramelizing. The more you can do to prevent fucking these things up, the better.

Rinse your potatoes off and let them drain for at least 10 minutes in a colander. Adding wet potatoes to hot oil is bad news bears for everybody. Add the potatoes to a large vat (heavy bottomed sauce pot, whatever) of 325 degree oil and blanch for 7 or 8 minutes until they’re just cooked through. Work in batches to not overcrowd the pot — no one wants oil splatters on their bare chest (assuming you’re frying shirtless). Remove the potatoes and let them cool on a baking sheet lined with paper towels.

Pulse the potatoes in a food processor for about 5 seconds, again working in batches to prvent overcrowding. hen the potatoes are all finely minced, put them in a bowl and add about ½ teaspoon of salt per potato, and 1 teaspoon of cornstarch. The starch is going to help hold the potatoes together.

Form the potato pulp into small cylinders, place them on a baking sheet, and throw them in the freezer for about an hour to help them set. You can keep your oil on the stove while the tots are the freezer, just turn the heat to low. Crank the heat back up when you’re ready to fry and get the oil up to 350 degrees. Drop the tots in about 10-15 at a time, making sure not to overcrowd. If you learn anything from this, it’s to be patient and work in batches. And also that tater tots are really dope. That’s important too.

Fry the tots for 4 or 5 minutes, or until golden brown on the outside and cooked through on the inside. Remove from the oil with a deep frying spider or a slotted wooden spoon. Let them drain on some paper towels, and sprinkle them with salt. For optimum tater tot dopeness, lay them on on a heatproof pan, cover them in cheese and bacon, and bake until the cheese is melted. Cover in sour cream and scallions and binge eat them while watching playoff football.