Bite Club: How to Make Shrimp and Chorizo Potato Skins 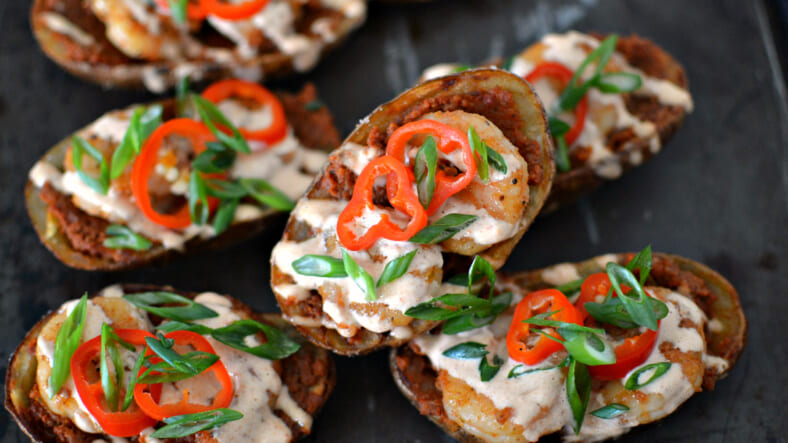 I know what you’re thinking right now: “Why are you putting shrimp and chorizo inside potato skins? What was wrong with bacon and cheese? Do you think you’re better than me? Because you’re not, you know. You come in here swinging that big old chorizo dick around like it means something, but you know you’re trash just like the rest of us.”

To which I would respond: “Holy shit man, that’s an unreasonable amount of animosity towards potato skins.” Anyways, the way I see it, putting the same stuff inside nature’s perfect little starchy flavor boats over and over is totally neglecting their full potential.

Bacon and cheese potato skins are to Peyton Manning as these shrimp stuffed bad boys are to Cam Newton. One one hand, you got the tried and true staple that’s proven himself enough to win a ring, but now all he does is throw 35 check downs a game and make you realize how fucking boring small ball is.

On the better hand, you have the bold, unapologetic, versatile, aesthetically pleasing counterpart taking shots downfield and dabbing on fools like it’s his job with infinite potential to be a game changer for the next decade. Is the analogy perfect? Not even close. Fuck it—just eat the potato skins.

Take a bunch of Russet potatoes, cover them in salt and olive oil, prick a bunch of holes in them with a fork, then throw them in a 375 degree oven for about an hour, or until they’re fork tender. Take them shits out and let them cool for at least 10 minutes. Remember that game “hot potato”? Yeah, that shit’s real.

When the potatoes are cool enough to not fucking ruin your day, slice them in half, then scoop out as much potato pulp as possible while leaving the skins intact. The potato itself is the worst tasting part of this deal—get it outta there. Try and remove any and all trace that the potato was ever a plant growing in the ground.

Now, you could bake those potato skins to finish cooking, or, if you don’t want to disappoint everybody, you could pop them in the deep fryer. It just makes sense. Deep fryers and potatoes go together like lamb and tuna fish. Or, in your country, maybe spaghetti and meatballs. Heat some vegetable oil in a deep, heavy bottomed pot to 375 degrees then throw those shits in the pot for 3 or 4 minutes, or until golden brown and crispy. Let them drain on a paper towel, then sprinkle them gently (gently!) with salt. Keep them warm in a 200 degree oven.

Get some chorizo going in a non stick pan over medium heat. Also, don’t spring for the expensive “artisanal” sausage—you want the real dirty stuff. You want the bright red shit made out of lymph nodes and cheek cartilage that has roughly zero real meat in it. Cook the chorizo for 10-15 minutes until you get some caramelization on it and continue then continue to break it up with a spatula. Set it aside for later.

Cook some scrimps. Dust those bad boys in a cajun spice and pan fry at high heat until they’re slightly pink. Now, start building the foundation of your loaded skins. Throw in a spoonful of chorizo, a few scrimps, some chopped scallions, thinly-sliced Fresno chilies, and a little drizzle of hot-sauced mayonnaise. Go cats.