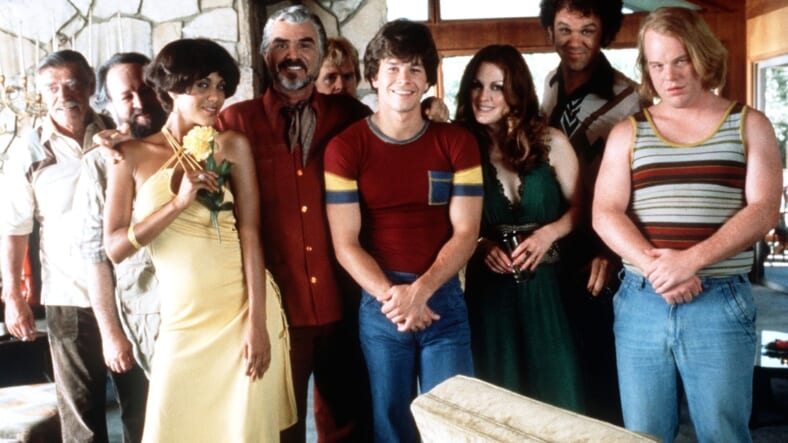 The year was 1997. The Zimas were flowing, there were frosted tips as far as the eye could see, and Night Ranger’s 1984 power ballad “Sister Christian” was suddenly cool again.

It’s definitely one of the greatest movies of the ’90s and a movie you probably already know and love. Still, there’s a lot to this nearly two-and-a-half-long flick that you may have missed, mostly involving on-set feuds, last-minute casting swaps and prosthetic appendages.

Below, 10 things you probably never knew about Boogie Nights:

Leonardo DiCaprio told an Australian radio show that Dirk Diggler was the one role he really regretted turning down, and we can hardly blame him.

“Probably the only film I was offered and turned down but now wish I had made is Boogie Nights,” he told the Kyle and Jackie O Show. “The first time I met Paul Anderson to discuss that role I hadn’t seen any of his previous work. Now I’ve seen a lot of it and I really liked that film.”

Still, he kind of had to say no to make room for James Cameron’s Titanic, which became the highest-grossing film of all time after its release and turned Leo into a global superstar who can pick any movie he wants to star in (and seemingly date any supermodel as well). In any case, the sex scenes in Boogie Nights were definitely a hell of a lot more interesting to shoot than that “Draw me like one of your French girls” nonsense.

2. Mark Wahlberg almost turned it down, too.

Wahlberg, then best-known as “Good Vibrations” rapper Marky Mark and a Calvin Klein underwear model, had his doubts after being referred to Anderson by his Basketball Diaries co-star Leonardo DiCaprio.

“Showgirls had just come out. That movie was a disaster. And you know, coming from the underwear background, the music stuff, I was like, ‘Ehh, I don’t want to do this.’ But there was just so much hype around the script,” Wahlberg told Grantland.

“So finally I started reading it. I got 35 pages into it, I put it down, I said, ‘I’ve got to meet the director.’ I said, ‘This guy either finally wants me to take the Calvin Kleins off, or he wants to make a really serious movie.'”

As it turns out, he wanted a bit of both. Boogie Nights marked a major career progression for Wahlberg while toying with his bad boy reputation.

Director Paul Thomas Anderson revealed in the DVD commentary that when he reached out to Samuel L. Jackson, his first choice for the role, the prolific actor said, “What the hell is this?” and outright refused to even audition.

That’s one hell of a legacy.

5. Diggler’s giant dong was a prosthetic made of plaster

Even if Boogie Nights made Mark Wahlberg a reputable movie star, he’s been dogged by questions of his real dick size ever since.

In the final shot of the film, Diggler drops trou to reveal if the penis everyone’s been hyping up the entire movie is as big as they say. (Spoiler: it is.) Regrettably for Wahlberg, said penis was a prosthetic made of plaster and faux pubic hair, meaning he’s clearly not as hung as his character.

Still, it got the actor plenty of props on set.

“What Mark Wahlberg did in that movie was all sorts of things that he had to absolutely commit to,” the director of photography Robert Elswit told Grantland. “He had to put a prosthetic cock on his own cock, you know what I mean? That’s asking an awful lot of an actor, honestly.”

6. Ron Jeremy consulted on the movie.

Burt Reynolds was an actual ’70s movie icon, but the Smokey and the Bandit actor wasn’t exactly fun to be around on the set of Boogie Nights. He famously beefed with Anderson during filming, chalking it up to working for an arrogant up-and-comer.

“I think mostly because he was young and full of himself. Every shot we did, it was like the first time [that shot had ever been done],”Reynolds told GQ. “I remember the first shot we did in Boogie Nights, where I drive the car to Grauman’s Theater. After he said, “Isn’t that amazing?” And I named five pictures that had the same kind of shot. It wasn’t original.”

Ouch. About turning down a spot in Anderson’s follow-up film Magnolia, Reynolds told The Guardian, “I’d done my picture with Paul Thomas Anderson, that was enough for me.”

In other words, “Thanks for the Golden Globe, you dick!”

For many fans, the most memorable scene of a movie packed with outrageous moments is drug dealer Rahad Jackson, played by British actor Alfred Molina, belting out “Sister Christian” while a random dude wearing only underwear sets off firecrackers in the background. It’s a bizarre moment that cranks up the tension—just before Diggler and his gang of drug-addled thieves stages a robbery at the dealer’s house—to unbearable levels.

Thanks to the film, the epically cheesy ’80s power ballad is forever associated with actor Alfred Molin. Shockingly, the actor told Grantland he had never heard the song before filming, claiming it never got much play on English radios.

“When I said yes to the part, they sent me those two songs [Rick Springfield’s “Jessie’s Girl” and Night Ranger’s “Sister Christian”] … I knew neither of them because neither was released in England,” Molina said. “So I had to sit down for like three days on my own, playing those songs over and over and over so that I knew them backwards because they became so emblematic for the character.”

Just because things don’t end well for Diggler doesn’t mean Boogie Nights is a moralistic indictment of the San Fernando sleaze factory. In fact, it’s the opposite.

Don’t expect Boogie Nights 2 to ever happen, despite how awesome it might be.

In an interview with Moviehole, Anderson completely axed any hopes of a sequel by admitting the hard-living Dirk Diggler would be a goner by now.

“I wonder how many of these characters would even still be alive? Probably a few of them, but I fear that most of them might be dead,” Anderson said. “I doubt Dirk Digger’s still alive. He’d be probably gone. I couldn’t see him making it.”

“I can see Burt Reynolds’ character Jack Horner still going on, though.” Too bad a sequel with Burt Reynolds would never fucking happen (see #7).

What are you still doing looking at this list? Go watch Boogie Nights on Netflix right now.