RGIII isn’t the safest bet, but he’s the most interesting. 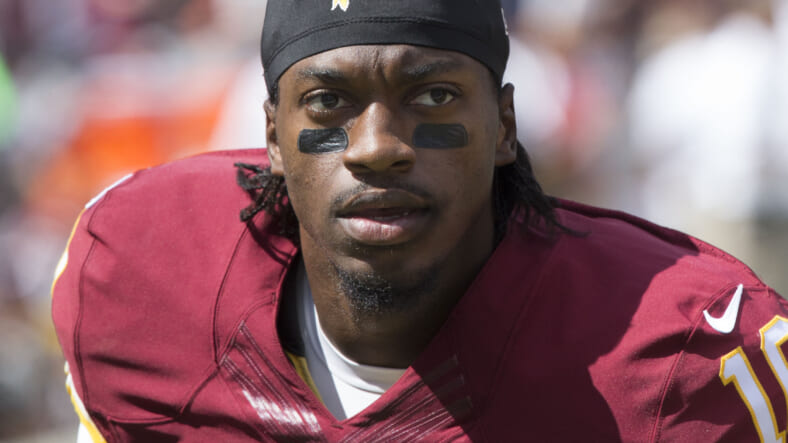 On Monday, Peyton Manning announced his retirement. On Wednesday, Brock Osweiler signed with the Texans. Now, on Thursday, the Denver Broncos are without a quarterback. What are the defending Super Bowl champions to do?

Sign a free agent or make a trade, of course. At this point, it looks as if the Broncos will bring either Colin Kaepernick or Robert Griffin III to Denver. But they’re by no means the only options. Here are the top four candidates to take over for The Sheriff at Mile High.

4. A RookieAs the Super Bowl champs, the Broncos will pick last in the first round of April’s NFL Draft and while that might not sound like the ideal spot to snag a quarterback of the future, GM John Elway will have some options. Michigan State’s Connor Cook or Memphis’ Paxton Lynch could interest Broncos head coach Gary Kubiak, who’s known a wizard with developing quarterbacks. In all likelihood, drafting one of these guys would also require signing a veteran to compete with him for the starting job, someone like…

3. Ryan FitzpatrickThe safe option, Fitzpatrick will be a difficult get for the Broncos. After lighting it up for the Jets last season, the 33-year-old was expected to remain in New Jersey. But two days into free agency, that hasn’t happened and reports say the team and its quarterback are still far apart. If the Broncos want a quarterback who could take them back to the Super Bowl quickly, Fitzpatrick is the man. His upside, however, is pretty limited.

2. Colin Kaepernick Reportedly the “chief target” for the Broncos, Kaepernick is still a member of the 49ers and potentially a great fit with new coach Chip Kelly. But his relationship with the team has soured over the years, so it’s reasonable to think he’s on the block. Problem is, the Niners are after a lot in exchange for Kaepernick, who the team benched last season in favor of Blaine Gabbert. If the Broncos want Keapernick they’ll have to pay, and they’ll be doing so for a quarterback who some say is toast.

1. Robert Giffin III The erstwhile Redskin and one-time Rookie of the Year earns the top spot for two reasons. First, he’s a free-agent, meaning the Broncos wouldn’t have to give up anything but money to bring him to town. And second, he’s still something of a mystery. Unlike Kaepernick, there’s still something unknown about RG3’s game. Can he rediscover the skills that made him one of the NFL’s most exciting players just a few years back? A team that just won the Super Bowl with some of the league’s worst quarterback play can afford to find out.